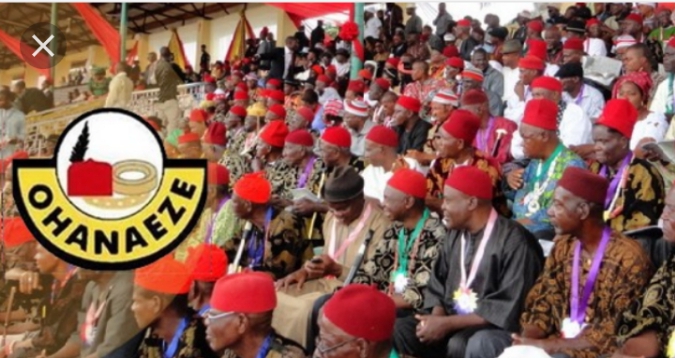 A pan Igbo group, Ohanaeze Ndigbo worldwide has described the former Governor of Rivers State and current Minister of Transport Rt. Hon Chibuike Rotimi Amaechi as a bona fide Igbo man, and such more of an Igbo man than a Lagos based All Progressives Congress, APC, chieftain, Joe Igbokwe

The group who warned against the disparagement of Igbo political leaders, said campaigns of calumny, casting of aspersions will be unsuccessful, added that,“Verbal diarrhoea and vituperative predispositions of Joe Igbokwe against Chibuike Amaechi is an act of timidity and cowardice.

“Igbokwe’s unprovoked onslaught aimed at the Minister of Transportation should be investigated as it’s organized rogue operations of political musketeers, as its defamatory, calumnious and slanderous”

The pan Igbo group in a statement signed by its Secretary-General, Okechukwu Isiguzoro and circulated to journalists, explained that Amaechi is a registered member of Ohanaeze Ndigbo in the Rivers State chapter since the year 2000, as well as a bonafide member of the Ime obi( the apex decision making organ in Ohanaeze) based on his position as former Governor and current minister from Ikwerre, Igbo speaking area of Rivers State since 2015.

“This is our verdict, Chibuike Amaechi is a bona fide Igbo man, and there is no reason why anyone would incite crisis just for cheap political goals, the issue raised on abandoned properties in Rivers state after Biafra war is a hoax and diversionary, as based on the facts before us, there is no record of any Ikwerre man or woman that benefited from the obnoxious policy and nobody should blackmail an Ikwerre with the abandoned property saga,” Ohanaeze said.

Recall in a recent article with the caption “The cry of the hang man” written by Oby Ndukwe, a socio-political analyst, commentator and publisher in Port Harcourt, had called on the pan igbo group to caution their son.

The article read in part, “The vituperation of a respected son of Igbo land and his discordant tunes in the market square faraway Lagos reveals the selfish motive of Joe Igbokwe and other lost sheep of Ndigbo.

“Just as I would prefer a Pius Anyim than a Dave Umahi in 2023 is the same way Joe Igbokwe would choose a Tinubu than an Amaechi for the top job. It is purely for personal reasons.

“Tinubu is accepted in Lagos as a Lagosian in spite of his natural roots in Osun. It will be foolhardy for anyone to try to separate Asiwaju from Ekó! Same way Joe cannot tell Amaechi his real roots in spite of boundaries created for a specific purpose.

“Ohaneze Ndi Igbo, the fight is yours except there is an agenda to change your Constitution on who constitutes the Igbos of Nigeria” Oby Ndukwe declared .