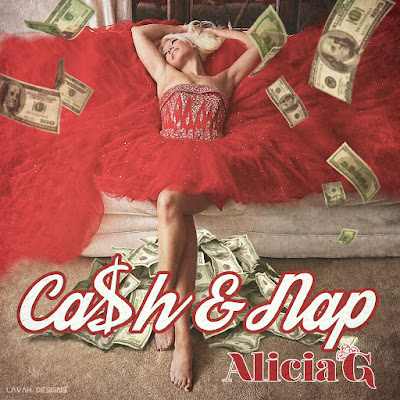 Alicia G has officially released her highly anticipated Single& Video “Ca$h & Nap” worldwide. The single will be distributed to over2,000 digital retailers and is a spotlight feature on Spotify.  Via LRT Music Group/INgrooves, the track willbe averaging over 10,000 active streams per month and 31,000 in total as of July1st. The Video will be distributed to over 1000 video platforms, Blogs, VEVO,ITunes to name a few,  as well asInternationally.  The connection betweenAlicia G and her international and North American fan base is ultra-intricateand purely organic on all levels.
Consumers in North America are captivatedwith the Alicia G lifestyle, fashion presence, and musical veracity. Alicia Gis fearless and limitless in a world filled with insecure millennials,superficial image marketing, and cyber bullying. Her voice speaks directly toYoung America and her music strongly resonates within the current culture. Thegenre of pop music is a super competitive market and only superstars emerge andsurvive in such an arduous playing field. The commercial appeal and impact of “Ca$h& Nap” has placed Alicia G in a position of strength in multiple radiomarkets. The DJ pools and program directors are adding the single in theirperspective markets and the list continues to increase.

Viacom, VH1, and BET have taken interest in Alicia G and approved her performance/appearance at the BET Experience! Alicia G is one of the leading characters in the music video “We Hustle” featuring one of the biggest stars in music: Lil’ Wayne. From her music training at the tender age of thirteen to being on stage with Lil’ Wayne performing in front of 4,000,000 people worldwide, Alicia G is leaving superstar footprints.

Youtube Link: https://www.youtube.com/watch?v=FhCrUJRuxwU
Vevo Video Link: http://www.vevo.com/watch/USA2P1660782
Purchase on iTunes: https://itun.es/us/eRRwcb
Alicia's experiencein the world of music/entertainment has allowed her to be featured inmainstream magazines in Las Vegas, Miami, NYC, Atlanta, Houston, and more. Theinternational crowd has embraced her music, swag, and fashion as their own.Alicia G is currently reading film scripts for projects launching in 2017 andstarring in music videos, reality TV shows, and promotional print ads in 2016.Alicia's music is gaining momentum in multiple international markets andreceiving over six hundred spins per week in Houston, Miami, Los Angeles,Atlanta, Tampa, Las Vegas, and New York.
The management ofAlicia G is prepping a 2017 international, twenty-city tour, North AmericanShowcase Tour, clothing partnerships with Pushers Collective, Alicia G mobileapp to be launched in 212 countries, and more. The brand and life of Alicia Gis moving full-speed ahead and her raw ambition will ensure she continues tothrive! The hype of “Talk to The Hand” is real! Stream the single on Spotify,Apple Music, Google Play, Tidal, Deezer, and all other digital streamingservices worldwide.