Most, if not all, were brought as slaves to work for European colonizers.  African slaves may even have been a part of Francisco Pizzaro’s expeditions in Upper and Lower Peru.  They originated in different areas of Africa, including Congo, Angola, Senegal, Mozambique, Ivory Coast, and Ghana, and in most cases were brought to Upper Peru from Lima or Buenos Aires, cities that did a lively trade with slave merchants. Afro-Bolivians have always had a strong sense of being negros (their preferred term), and of possessing cultural and linguistic values that set them apart from the remainder of their compatriots, indigenous and mestizo. 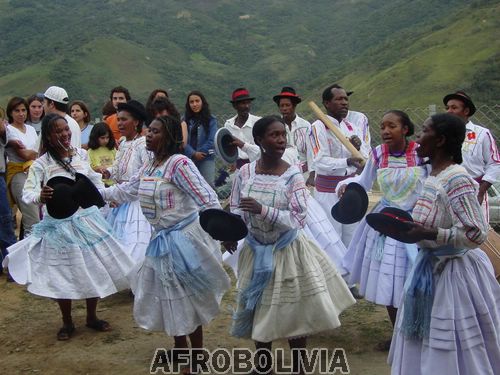 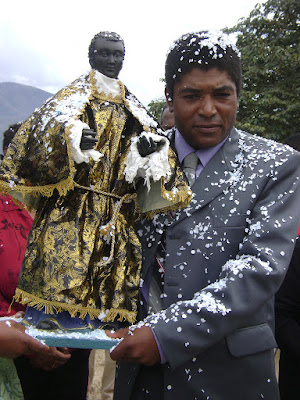 Alejandro Fernandez Gutierrez, “Santo Patrono San Benito,” a procession of the saint’s image in the Aymara and Afro-Bolivian town of Coripata, La Paz, 2009. This celebration is one of many held annually throughout Central and South America for San Benito de Palermo, especially in areas with historically Black populations.
In Kinky Gazpacho: Life, Love & Spain, author and journalist Lori L. Tharps writes,
Professor [Isidoro] Moreno had explained that the [African] slaves [in Spain, since the mid-1400s] had their own confraternities or religious brotherhoods, which was one of the only ways they could exercise some control over their lives. They could gather freely in the church and participate in the same holy day festivals as the Spaniards and conduct their business with some autonomy…
On one side of the church I found a small statue of someone who I assumed was a Black saint. He had dark skin, wore a gold-tinged robe, and carried a heart and a cross in his hands. At his feet were two ceramic pots with fresh flowers. The white and blue pots both read “Hmdad de los Negritos” (Brotherhood of the Blacks). The plaque under the statue read “San Benito de Palermo.” Apparently he was the patron saint of this brotherhood. I almost wept with emotion, realizing that the slaves’ existence in Seville had been preserved. My people had stood in this church, sung here, and worshiped here…How was it possible, I wondered, that when I asked some random people on the street why this church was called the “Chapel of the Little Black People,” they had no idea.
…Los Negritos have since 1888 been dominated by whites, without a black face to be seen.
Ceremonies. The Afro-Bolivians of Nor Yungas have a ceremonial monarchy, which is part of a long lineage of kings. Earlier in the twentieth century, King Bonifacio Pinedo, who lived in the village of Mururata, was recognized as the Afro-Bolivian king. He wore a cape and crown for major celebrations, especially Easter. When King Bonifacio died in the 1960s, no immediate heir to his throne was crowned until his grandson Julio Pinedo became king in 1982.
Arts. Among both Afro-Bolivians of Nor Yungas and Afro-Bolivian migrants in La Paz, music, dance, and poetry are the most important forms of artistic expression. In 1982 Afro-Bolivians of Nor Yungas revitalized much of their traditional music. Before this, they participated in the brass-band tradition that became so important to Bolivians during the mid-to late twentieth century.
Among the revitalized traditions are saya, a song genre that serves Afro-Bolivians as a means of maintaining and transmitting their oral history; mauchi (funeral music); baile de tierra (traditional wedding music); and zemba, a lively combination of drumming and dance that was formerly associated with the Afro-Bolivian monarchy (Pizarroso Cuenca 1977, 73).
Singing is the most prominent aspect of Afro-Bolivian music. All of the genres except mauchi include accompaniment by several different drums, and saya adds bells and scrapers.
The manufacture of musical instruments is considered an art, and community instrument makers are recognized for their talents. Especially important are saya drums, long bamboo scrapers called cuanchas, and colorful drum mallets called haucañas (an Aymara term). Saya drums are of three different sizes, and each plays a unique rhythm that interlocks with the other two. The largest drums are the asentadores, and, as the name suggests, they "set" the beat. Second in size are cambiadores, which interlock a triplet pattern with the basic duple established by the asentadores. The smallest drum is the gangengo, which interlocks an upbeat pattern with the asentador.
In the saya tradition, both men and women dance, but they form two separate dancing groups. The captain of the dancers wears sets of bells around his legs. The bells worn around his left leg are pitched higher, and they lead the women dancers. On his right leg, the captain wears a lower-pitched set of bells that lead the men. Afro-Bolivians point out that the bells also symbolize the chains and shackles worn by their enslaved ancestors.
Both the writing and reciting of poetry are highly valued forms of artistic expression. In Tocaña and La Paz, community poets recite during brief interludes at public musical performances. Their poetry often addresses Afro-Bolivians' struggles against racism and discrimination.
Death and Afterlife: Afro-Bolivians consider their mauchi tradition to be a vestige of a lost Afro-Bolivian religious practice. Mauchi is sung by men after a burial as friends and relatives walk back to their village from the cemetery, and it is sung on Todos los Santos (2 November). In mauchi, men join their hands together and form a large, closed circle. One community elder leads the unaccompanied singing, and the other men respond.
source: http://www.everyculture.com/South-America/Afro-Bolivians.html
further readings:http://www.personal.psu.edu/jml34/afrobol5.pdf
http://lacc.fiu.edu/hemisphere/hemisphere_vol_18.pdf 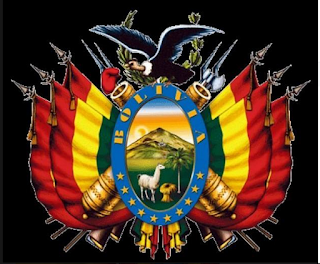 Afro-Bolivian Royalty
JUNE 20, 2011
BY ANDRES SCHIPANI
Bolivia has a king. And he is not one of indigenous descent, but surprisingly, African. Julio Pinedo—one of the many Afro-Bolivians who make a living growing coca—found out a few years ago that he is a direct descendant of Bonifaz, a tribal king from Central Africa. Now, he’s the country’s first Afro-Bolivian king in 500 years. 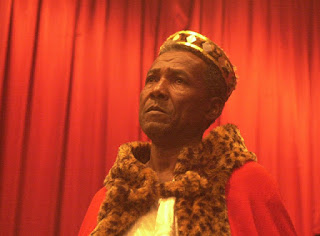 Julio Pinedo is the first Afro-Bolivian king in 500 years
“I had no idea about my royal lineage,” he says, humbly. “I knew my ancestors were, like other Africans, brought to work in the Bolivian gold and silver mines of Potosí. But because of the weather—it was too cold for the Africans to stay there—the Spaniards realized that they were losing slaves and had to move the ‘Afros’ to a place where the climate was friendlier.”
It was his great-grandfather who moved from the mines to the coca fields in Los Yungas region. There, others recognized his royal lineage but protected his identity from the patrons. That is until a secret crowning of Julio’s grandfather, “Bonifacio I,” in 1932. His grandfather, who was then leading the personnel at a country estate, raised King Julio “Bonifacio” Pinedo.
Years later, his crowning was not only a surprise for him as it was for many to find out that Afro-Latinos live in Bolivia.
Julio Pinedo greets the audience after being crowned as the Afro-Bolivian king by members of the community of African descendents that live in near La Paz, Bolivia.
So then, in what some label as a political move to make the world aware of the Afro-Bolivian presence, the community decided to go big and crown him at a ceremony in the country’s capital, La Paz, in December 2007. The dances, chants and drums of their ‘Saya’ music, inundated the city for a whole morning. “It was a glorious day,” the shy and silent King recalls from the small village of Mururata.
But this royal picture is not as glossy as it seems.

Most Afro-Bolivians, including King Julio Pinedo, are poverty-stricken farmers that work all the year round, harvesting the coca leaves, citrus, coffee, banana or yucca, and hacking into the hard red earth with hoes. They are the poorest group inside South America’s second-poorest country, after Guyana.

One of them is José Iriondo, who back in 1967 fought with the Argentine-Cuban revolutionary Ernesto “Che” Guevara in eastern Bolivia. “When I was with Che I learned that we have to fight till the end. And I am now still fighting for the rights of the Afro-Bolivians, because we have to keep fighting,” he says.
Today, he works seven days a week and earns less than $30 a week, struggling to make ends meet.
Until recently more than 35,000 poverty-stricken Afro-Bolivians, like Mr. Iriondo, felt overlooked and even discriminated against. But now, for the first time since they arrived in Bolivia as slaves in the sixteenth century, attitudes toward them seem to be slightly changing. He feels happy that Afro-Bolivians are now recognized by the new Constitution pushed for by the country’s first indigenous president, Evo Morales, and passed by national referendum in January 2009. And now, finally, they have representation.
Jorge Medina used to run the Centro Afroboliviano para el Desarrollo Integral y Comunitario (CADIC) until he was elected as the first-ever Afro-Bolivian congressman a year-and-a-half ago. “I feel proud of being Afro-Bolivian and now, most of all, of representing my people. At last, we have an Afro-Bolivian with a voice,” he explains, adding that “the fact that we back this process of change led by an indigenous president does not mean the Afro-Bolivians are from the party of this indigenous president, simply that this process of change is allowing us and other voiceless peoples to show ourselves.”
Jorge Medina Barra,Afro-Bolivian leader
Now, that they have grown stronger, they have developed links with several networks of Afro-descendants, mostly in Latin America and the Caribbean. “We are now working together on issues such as racial equality, to stop with racial discrimination, xenophobia, and intolerance around the region. We still have to work on that, Bolivia is still a racist country on several fronts.”
So nonetheless, despite the reforms adopted by President Morales to end discrimination against indigenous people and other vulnerable groups, such as the Afro-Bolivians, Mr. Medina warns the Afros are still at a disadvantage. “So we cannot rest, we still have to keep fighting for our rights; there is still discrimination and racism and people that want to put us down.”
Back in his town of Mururata, King Julio Pinedo feels “good and tranquil” in his role of having to be always watching over the needs of the Afro-Bolivian communities. But he echoes Mr. Medina’s views, and feels there is still some way to go: “We were slaved but we are not slaves anymore. Yet it is complicated because not many people understand us, and what we are fighting for.”
source:http://americasquarterly.org/node/2604
Pasted-from  http://kwekudee-tripdownmemorylane.blogspot.com/2012/12/african-descendants-in-bolivia-afro.html
Tags: afro=bolivia, angola, beni, coast, cochabamba, congo, cruz, evo, ghana, ivory
★
★
★
★
★
Votes: 0
E-mail me when people leave their comments –
Follow