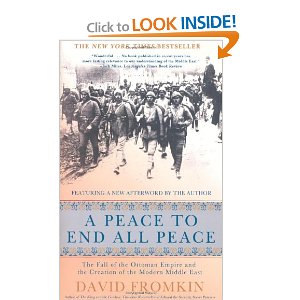 A Peace to End All Peace: The Fall of the Ottoman Empire and the Creation of the Modern Middle East by David Fromkin.

This review has appeared in several magazines and newspapers when it was
initially written/reviewed. However, the reviewer believes that in light of
the present situation in the Middle East this (book)review could be a useful
guide for understanding the politics involved in that region.
Please be advised that the politics have not changed. It is still
imperialistic and rapacious.

In our time the Middle East, from the Persian Gulf to what some consider
Afghanistan and Egypt, has been a battleground on which rival religious,
ideologies, nationalism, and tribal dynasties have clashed. All of these
conflicts are based on political inheritance, political and economic
arrangements, external political divisions imposed upon the region by
encroaching European powers after the First World War. David Fromkin takes
a panoramic look at the Middle East we know today. He looks at allied
policy from 1914 onwards as the culmination of the nineteenth century "Great
Game," in which Russia played a leading role. He discusses how and why the
allies came to remake the geography and politics of the Middle East, drawing
lines on an empty map that eventually became the new countries of Iraq,
Israel, Jordan, and Lebanon.

Fromkin began his research in 1979; he was able to gain access to
previously concealed documents and private papers which point to the
propaganda that the Europeans used to infiltrate the Middle East. He
particularly addressed the British and their meddling in Muslim religious
affairs and the pretense that they had entered the Middle East as patrons of
Arab independence from Ottoman Turkish rule. Moreover, the Arab revolt that
formed the centerpiece of their narrative occurred not so much in reality as
in the imagination of T. E. Lawrence, a teller of fantastic tales, whom the
American journalist, Lowell Thomas, transformed into Lawrence of Arabia.
Fromkin disentangles the bureaucratic knots that British officials were
wrestling with insofar as whose policies should or would be carried out. A
good case-in-point was the misunderstanding between Sir Mark Sykes, London's
desk man in charge of the Middle East, and Gilbert Clayton, the head of
intelligence in Cairo, Egypt. This misunderstanding revolved around Sykes
innocently believing that certain areas would be granted to the Arabs while
officials in London were charting these areas for Britain. Hence, this was
in large measure the basis for the Sykes-Picot agreement.

For Fromkin, the Middle East means Egypt, Israel, Iran, Iraq, Turkey, and
the Arab states of Asia; also, the former Soviet Central Asia and
Afghanistan. this entire area is where Britain, from the Napoleonic Wars
onward, fought to shield the road to India from the onslaught first of
France and then of Russia in what came to be known as the "Great Game." He
sees the importance of showing the connectedness of all the major countries
in the region; this, by the way, is a refreshing deviation from other works
until recently. For example, he looks at the role of Britain, and France
and their political competition with Russia. It was, for the most part,
because of Russia that Kitchener initiated a British alliance with the Arab
Muslims, that Britain and France had some favorable thoughts about
preserving Turkish rule, and decided in the end to occupy and partition the
Middle East. Fromkin elaborates on the Foreign Office's public support as
it came from London for the establishment of a Jewish National Home in
Palestine. I should also add that Britain continued to hold the line in the
Middle East after the war because of what they rationalized was encroaching
Communism.

This book is historically exciting simply because it is about
decision-making procedures, and how the Europeans and Americans were the
only ones involved in those procedures. The author humbly points out that
as far as he knows his book is/was the first book that tells/told the story
as that of the Middle East in the widest sense; the "Great Game" sense, in
which Russia also played a part. This book was printed in 1989; there have
been other books since that time that have advanced the historical truth
about the Middle East; however, in all candor, I hasten to say that
fromkin's book laid the foundation.

As a consequence of this European power play, the basis of political life
in the Middle East--religion--was called into question by the Russians, who
proposed Communism, and by the British, who proposed Nationalism or dynastic
rule, in its place. The Shi'ites in Iran and the Muslim Brotherhood in
Egypt, Syria and elsewhere in the Sunni world kept that issue alive.
The French government did not allow religion to be the basis of politics;
instead, it championed one sect against the others, and that, too, was an
issue kept alive, namely, until recently, by the ideological conflict that
ravaged Lebanon. For fromkin, the years 1914 through 1922 were the
formative years for European ideas of conquest or control in the Middle
East. It was a time when Jewish and Arab Nationalism was budding; it was a
time when the French and the Vatican were the enemies of the Zionist
movement, and when oil was not an important factor, as it is now, in the
politics of the region.

There are two important, merging stories that appear in the book. The
first deals with Lord Kitchener's decision at the beginning of the war to
partition the Middle East after the war between Britain, France, and Russia,
and with his appointment of Sir Mark Sykes to work out the details. There
is a systematic, detailed explanation that looks at Sykes during the wartime
years, and Britain's blueprint for the Middle East's future.
The book continues by showing that the program Sykes had formulated was
realized after the war, and was embodied in documents formally adopted in
1922.

The author also looks at a number of other documents and decisions of
1922; for example, the "Allenby Declaration" which established nominal
independence for Egypt, the Palestine Mandate and the "Churchill White
Paper" for Palestine (Israel and Jordan emerge from this document);
furthermore, the British treaty that established the status of Iraq, the
French Mandate for Syria and Lebanon, and Britain's plan to place new
monarchs on the thrones of Egypt and Iraq, and sponsoring a new princely
ruler (for what was to become Jordan). In addition, there was the Russian
proclamation of the former Soviet Union in which Russia reestablished its
rule over Muslim Central Asia. All of these decisions and documents
resulted in what was later called the "Middle East Question." Additionally,
fromkin imparts that these elements revolved around Sir Mark Sykes and his
negotiations with France's Georges Picot, and Russia which all parties
agreed to partition the postwar Middle East among them.

The French received a bit less than had been agreed upon, and Russia was
only allowed to keep what they had already taken before the war; however,
the principle of allowing them to share with Britain in the partition and
rule of Muslim Asia was respected. Everything worked out well for Britain
as according to the Sykes plan: Britain ruled for the most part indirectly,
as protector of nominally independent Arab puppet monarchs, and proclaimed
itself the sponsor of both Arab and Jewish Nationalism.

The irony of these agreements is the fact that Britain deviated from
welcoming Russian and French presence in the region. Britain regarded
Russia as a threat to the area and the French as a disaster. France's
pro-Zionist stance in 1917 was transformed into anti-Zionism of 1921 and
1922; also, her enthusiasm for the Arab movement under King Faisal of Saudi
Arabia would change dramatically into a posture that regarded Faisal and his
brother, Abdullah, as untrustworthy and hopelessly ineffectual.

What is most important is the author clearly shows us that Britain was
embarking on a vast new imperial enterprise in the Middle East. It is very
clear that the present crisis in the Middle East stems from Britain's
abolishment of the Ottoman Empire; her decisions in 1922 about how that
regime should be replaced, but also from the lack of conviction she brought
to the program of imposing the settlement of 1922 to which she was pledged.
Lloyd George, Woodrow Wilson, Kitchener, T. E. Lawrence, Lenin, Stalin,
and Mussolini were the men who helped shape the twentieth century and they
were the men who played leading roles in the political drama of the Middle
East. This very informative book tells the reader exactly how they tried to
remake the world according to their vision and design.

Fromkin tells the reader that Winston Churchill, above all the others, was a
dominating figure whose so-called genius stimulated events and whose
personality colored and enlivened them. Each one of these
imperialists--especially British--which also included Jan Smuts, Leo Amery,
and Lord Milner considered the Middle East as an essential component or a
continued testing ground for their view of non-white countries.

This book discusses every major event during the above mentioned years.
It talks about Iraq (formerly Mesopotamia), it deals in depth with the issue
of Palestine; it discusses the battle between Britain and France for Syria,
the fall of the Ottoman Empire, the Balfour Declaration, and it even briefly
mentions the Protocol of the Learned Elders of Zion. It has an illustrated
photo layout and a vas bibliographical and source notes section.
This book is a very worthwhile investment.

*=====
Adib Rashad (RashadM@aol.com) is an education consultant, education
program director, author, and historian. He has lived and taught in
West Africa and South East Asia.

This article was previously published by theMarcusGarveyBBS (an entity of TheBlackList)
and TheBlackList at http://lists.topica.com/lists/TheBlackList/read