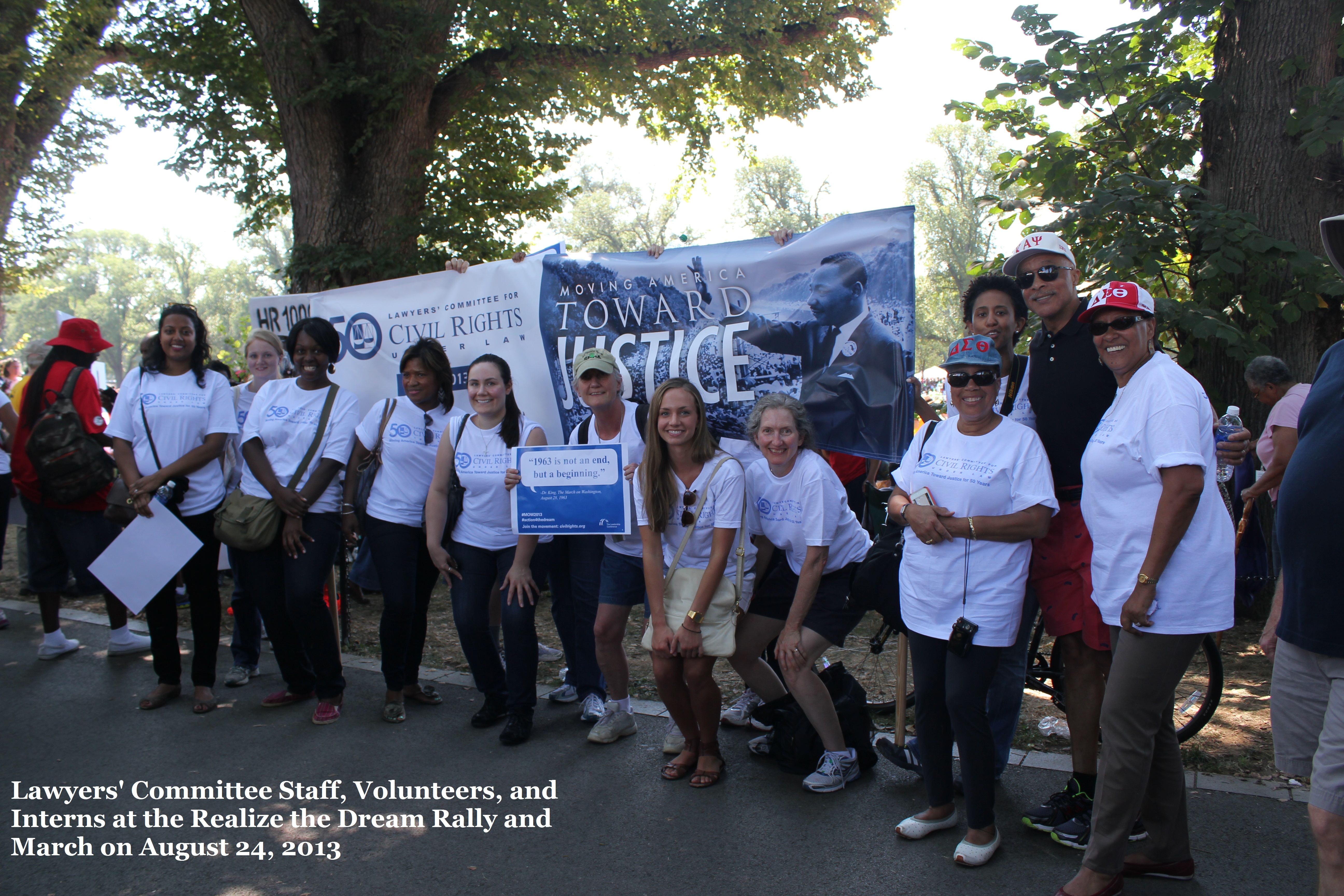 Today marks the 50th Anniversary of the March on Washington for  "jobs, justice, and freedom” where Dr. Martin Luther King Jr. delivered his iconic “I Have A Dream” speech.  Across the country, people are honoring this powerful moment in history and recognizing that although we have made great advances in the struggle for racial justice, the “Dream” has not yet been fulfilled. The Lawyers’ Committee will continue to fight for this “Dream”, but we will need increased resources and support from people like you that believe in our shared mission of equal justice. Please consider making a donation today in honor of the 50th Anniversary of the March on Washington and the continued struggle for racial justice.

Unfortunately, 50 years later significant barriers to racial justice remain and in the aftermath of the Shelby Supreme Court decision a wave of voter suppression efforts which threaten to disenfranchise millions of minorities are already underway. On June 25, 2013, in a 5-4 ruling onShelby County v. Holder, the Supreme Court of the United States delivered a devastating setback for civil rights in America.  The Court ruled that the coverage formula in Section 4 of the Voting Rights Act is unconstitutional, essentially paralyzing the federal review (preclearance) of changes to voting procedures under Section 5 until Congress takes action. The power of Section 5 was that it required those 15 states with a history of discrimination that were fully or partially covered by the law to prove that any proposed changes to current voting procedures were not discriminatory before they were allowed to take effect. Some of the formerly covered states, such as Alabama, Mississippi, North Carolina and Texas, have announced plans to implement voting procedures likely to have a discriminatory impact on millions of minority voters. Donate now to help us fight back against this new wave of threats.

The Supreme Court ruling in Shelby County v. Holder has threatened to unravel some of the critical work that the Lawyers' Committee has done in the past fifty years, thus requiring us to fight harder than ever to protect the right to vote for all. The Lawyers’ Committee will be implementing a proactive agenda to block and raise awareness of discriminatory voting changes and, when necessary, take litigation action against states implementing such changes. All of these activities will require drastically expanded resources for our work. Please join the fight by making your contribution today. Every dollar makes a difference.

As always, thank you for your support of our shared mission of securing equal justice for all. It is only with the support of individuals like you that we are able to be a key player in the fight for civil rights. We will continue to work towards fulfilling Dr. Martin Luther King Jr.’s “Dream” and the ideals that hundreds of thousands of Americans marched for, fifty years ago on this day.