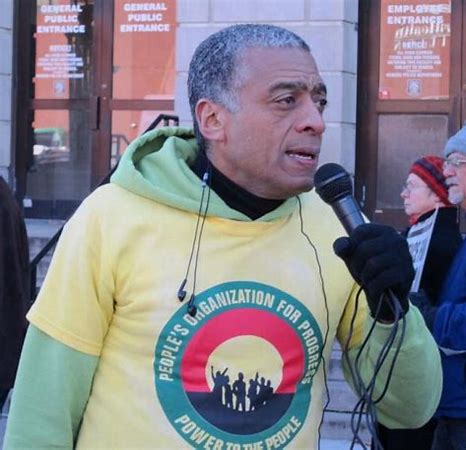 On Friday, October 8th, Lawrence Hamm, the founding chairman of the People’s Organization for Progress, will begin what he is calling ‘The Long March for Justice: For Police Accountability, Social Justice And Economic Progress.’

Hamm, a decorated long distance runner in high school who has also run several marathons in the 90s, will march from Montclair to Trenton, a 67 mile trek for each of his 67 years.

The march will begin at11am at the intersection of Church Street and Bloomfield Avenue in Montclair. He expects to reach Trenton on Saturday, October 16th.

The March was originally going to begin on October 11th.

The march will call for a broad range of reforms ranging from police reform to federal voting rights protections to a $15 minimum wage and beyond. The passage of key police reform bills, led by the Civilian Review Board Bill A4656 put forward by Assemblywoman Angela McKnight mandating strong civilian review boards for any community who seeks one, now languishing in the NJ Statehouse, are the key triggers and core demands driving this march.

The march will proceed through 22 New Jersey towns. It is expected that it will be joined by support rallies in marches in several of those communities.

The Action harkens back to historic long marches such as the epic March Against Fear in Mississippi in 1966 and the march from Selma to Montgomery for Voting Rights in 1965.

It is also characteristic of the organization’s 381 Day protest for Economic Justice that was launched ten years ago.

Joining Hamm for the duration of his trek will be seasoned social justice advocate Steve Young, the Atlantic City representative of the National Action Network. Young has vowed to walk with Hamm “every step of the way.”  Young resigned from Atlantic City’s effort to construct a Civilian Review Board for that tourist magnet town several years ago precisely because it was not designed to have the authority like the kind of Review Boards Hamm and legions of social justice advocates are getting behind through the McKnight Bill.

Joining Hamm at the kick off of the March will be Natacha Pannell, the sister of Phillip Pannell who was killed by Teaneck police officer Gary Spath in 1990. The trauma from that fatal incident still stalks that family. Pannell was only 16 when he was shot in the back with his hands up and killed. Natacha announced her decision to join the March two days ago on October 3rd, what would have only been her brother’s 48th birthday. Natacha is making a bid for the Assembly this fall to advocate for the disadvantaged and for social justice measures like those lifted up with this action.

Hamm will also be joined by Valerie Dale Corbett, the sister of Major Gulia Dale, a career vet who was tragically killed by Newton police officers in a mental health crisis on of all days, the 4th of July!

Hamm has already secured endorsements from over 20 organizations from all over the state.           He has secured endorsements from Newark Communities for Accountable Policing (NCAP), Black Lives Matter Paterson, Black Lives Matter of NJ, the Atlantic City chapter of the National Action Network (NAN), the Trenton AntiViolence Coalition and Our Revolution of Trenton-Mercer County, the Latino Action Newark, Montclair Citizens for Equality and Fair Policing, the Newark chapter of the NAACP, the Newark AntiViolence Coalition and the WBAI Radio Show Equal Rights And Justice.

This past week, he secured endorsements from the Irvington Chapter of the NAACP, Showing Up for Racial Justice (SURJ), North Jersey Jewish Voice for Peace, NJ Peace Action, Block The Boat NY/NJ, the New Brunswick Chapter of the NAACP, the Palestinian American Community Center, the December 12th Movement, and Newark’s pioneering Ironbound Community Corporation.

For more information about the work of the People’s Organization for Progress, please call 973 202 0745... www.njpop.org