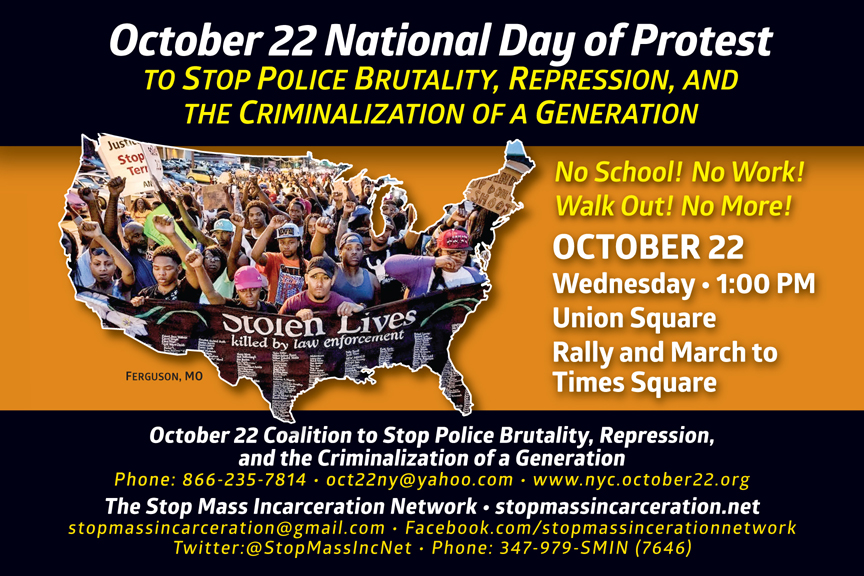 No School! No Work! Walk Out!

• If you are outraged by the chokehold murder of Eric Garner in Staten Island by NYPD, and the execution of Michael Brown in Ferguson Mo;

• If you are angered by the torture of mentally ill inmates by correction officers on Rikers Island;

• If you find it intolerable that the NYPD was indiscriminately busting down doors and raiding the projects in west Harlem;

• If you refuse to accept the mass incarceration of Black and Brown youth...

• And if you are inspired by the youth in Ferguson standing up to the cold blooded murder of Michael Brown, and that these outrages must stop ...

Then, you must help make 2014 October 22nd National Day of Protest to Stop Police Brutality, Repression, and the Criminalization of a Generation as powerful as possible... where thousands of youth and others take to the streets to say: NO MORE!

The New York Committee of the October 22nd Coalition to Stop Police Brutality, Repression and the Criminalization of a Generation has endorsed the Call for a Month of Resistance to Mass Incarceration, Police Terror, Repression and the Criminalization of a Generation in October 2014. The October 22nd National Day of Protest will play a critical role in inspiring more people to step forward to change the entire way people are seeing and confronting racially-targeted criminalization and demonization of whole sections of Black and Latino peoples.

This year we have a great responsibility for the 19th anniversary of the National Day of Protest to Stop Police Brutality, Repression and the Criminalization of a Generation. This day cannot be a business as usual day – today it is OPEN SEASON on Black and Latino youth and others. October 22nd must be a day where those who are targeted for brutality and murder – the Black and Latino high school youth -- step out in their thousands. Through resistance we will inspire others to step forward to stop this genocidal thrust taking place today.