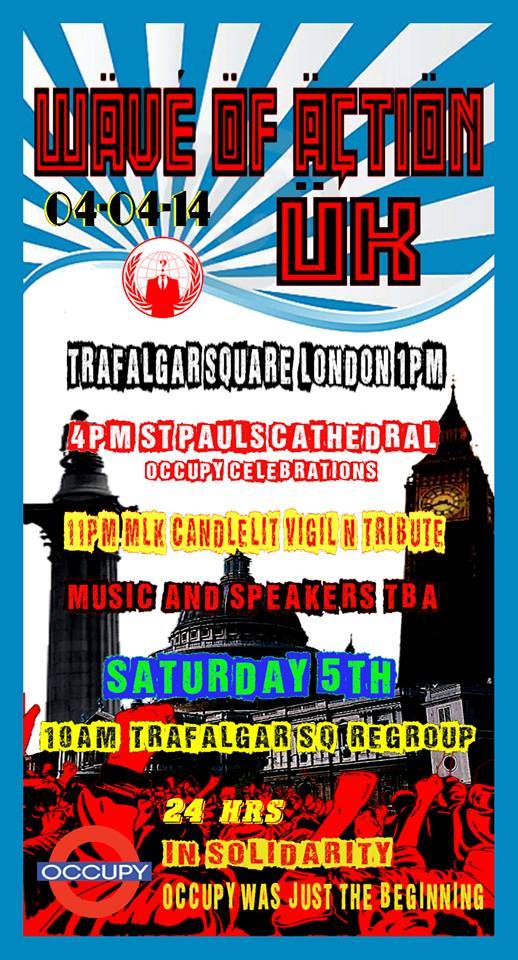 On 04-04-14 Wave of Action shall be launching internationally. Its the beginning of a year of action kicking off with a 24hr protests n parties at various old occupy camps across the globe.

We are launching WaveOfActionUK in Trafalgar Sq, After a rally and some speeches we will celebrating the Occupy movement and all they have achieved bringing the worlds corruption to the masses at St Paul's Cathedral. The 04-04-14 was chosen as it marks the anniversary of Martin Luther Kings Assassination and we will be holding a candlelit vigil and paying tribute to his life.

Wave Of Action invites people with opinions across the political spectrum to unite and find common ground against corruption. We will overcome divide and conquer propaganda by forming communities of support and compassion. Together we will fight for freedom and begin engaging in a relentless campaign of nonviolent civil disobedience. People will pledge to take part in whatever tactics they are interested in throughout a sustained three-month cycle. Here’s a basic list of tactics…

> Move your money out of the big banks and the stock market;

> Use alternative currencies and economic systems;

> Build urban and hydroponic farms, or get your food from them;

> Random acts of kindness and compassion;

You know what you can do to play a part. Do whatever you feel inspired to do. Amplify what you are already doing. Think about what you are willing to do to be the change we urgently need to see in the world, and then do it.

Tags: #waveofactionuk, welcome to my world, wwwm
E-mail me when people leave their comments –
Follow