Shares are encouraged and welcomed. If this letter speaks for you and you wish to send your own copy please feel free to copy and paste, and alter for your own needs, the text for your own letter.

Also on the website, download the support compilation three album set from Atona. Not to be missed.

We are in the company of madmen. That may seem a strange thing to say, yet when the actions of madmen impact the daily lives of millions, then we are in very dangerous company.

I am still trying to get my head around Iain Duncan Smith likening benefits to slavery and extolling the liberating effect of hard work on impoverished families. With in-work poverty now outstripping poverty in work-less households, his self promotion as a modern day advocate of anti-slavery is a monumental self delusion.

His claim that benefit changes were about a "journey from dependence to independence" is an astonishing piece of Chutzpah from a man dedicated to penalising people whether in or out of work.

His role in your war on the poor is one of reintroducing slavery. He claims, "Universal Credit is already changing lives: we are seeing claimants spending more time looking for jobs and moving smoothly into employment safe in the knowledge that it will always pay more to be in work." Really? The only truth in this is if a claimant who has been sanctioned finds a job, even a zero hours contract job, an hour a week on minimum wage pays more than zero benefits. Not so much making work pay as making sure benefits don't and not so much moving claimants smoothly into work as beating them into submission, driven by desperation.

You and your government have broken the most basic social contract between work and pay. Workfare is a means of forced labour undermining statutory legislation for even a minimum wage.

Business incentives, including for workfare placements, mean financial rewards whilst incentives to work are punitive and mean financial deprivation. Such double standards only work in the minds of madmen and slavers.

I am sure that Smith may well think of himself as a great libertarian whilst considering the voices raised against his policies, and those afflicted by them, as mere bleating, left wing extremist, malcontents, such is the astonishing power of self delusion.

When mad men rule, sanity becomes a crime. Such are times we are living in today. 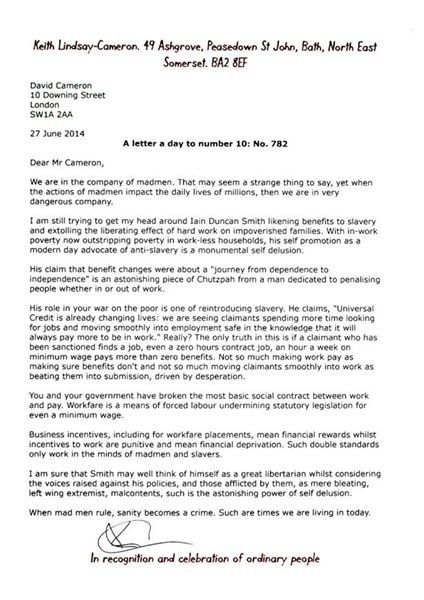