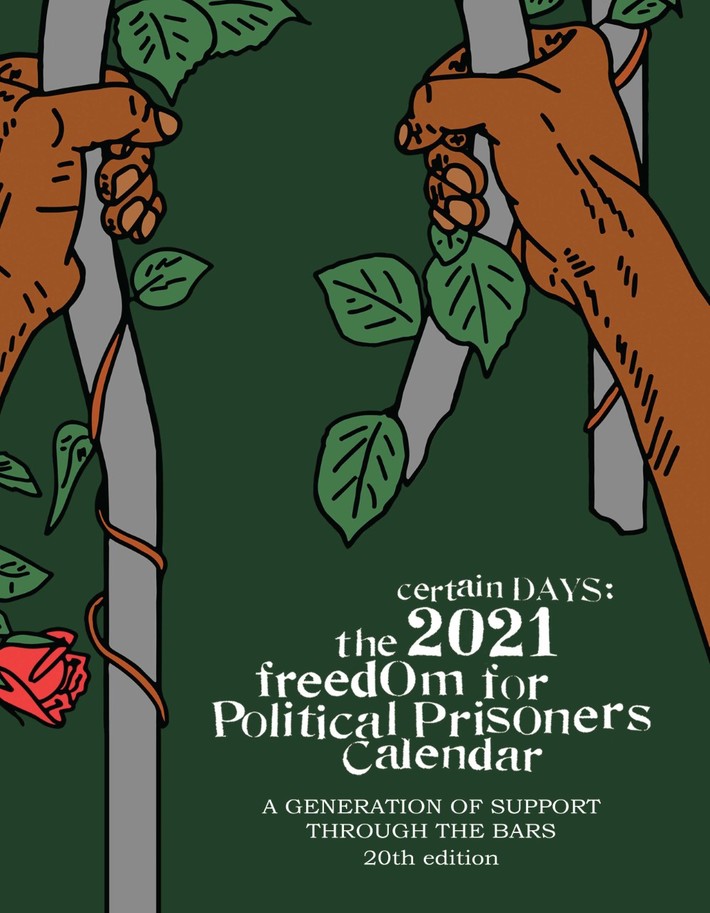 We are happy to announce that pre-sales for the 2021 Certain Days calendar (OUR 20th EDITION) have begun!

In the U.S., order from Burning Books in Buffalo.

In Canada, order 1-9 copies from Left Wing Books. Order 10 or more copies (and raise funds for your own organizations and projects!)  via certaindays.org.

The Certain Days: Freedom for Political Prisoners Calendar is a joint fundraising and educational project between outside organizers in Montreal, Hamilton, New York and Baltimore, with two political prisoners being held in maximum-security prisons: David Gilbert in New York and Xinachtli (s/n Alvaro Luna Hernandez) in Texas. Founding members Herman Bell and Robert Seth Hayes were happily welcomed home from prison in 2018. Learn more about them  at certaindays.org.

Your group can buy 10 or more for the rate of $10 each and sell them for $15, keeping the difference for your organization. Many campaigns, infoshops and projects do this as a way of raising funds and spreading awareness about political prisoners. Use the discount code "BULK" to get 10 or more calendars for $10 each. In Canada, you can order at our bulk rates at certaindays.org.

While COVID-19 makes its way around the world causing massive shut downs, prison officials make measly attempts at controlling the spread to the most vulnerable inside.  Let's raise the voices of prisoners, now more than ever.

Proceeds from Certain Days 2020 were divided amongst Addameer Prisoner Support and Human Rights Association (Palestine), Release Aging People in Prison (RAPP), Civil Liberties Defense Center and the Rosenburg Fund for Children. This year’s proceeds will go to some of the same grassroots groups and more.