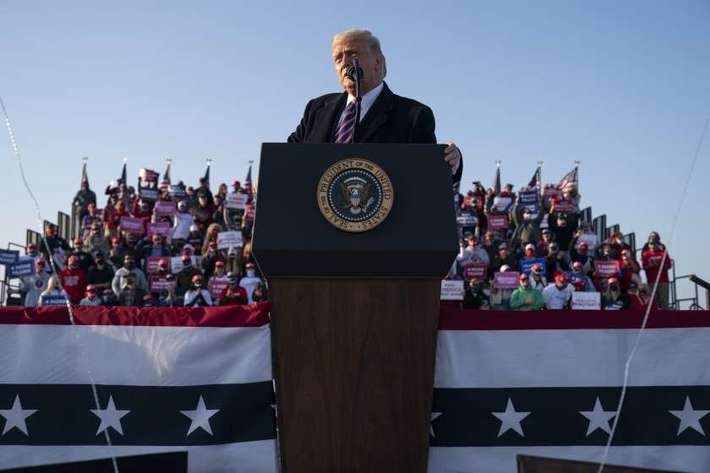 Politicians often flatter their audiences, but at a rally in Bemidji, Minn., last month, President Trump found an unusual thing to praise about the nearly all-white crowd: its genetics. “You have good genes,” he insisted. “A lot of it is about the genes, isn’t it, don’t you believe? The racehorse theory. … You have good genes in Minnesota.”

In case it was not clear from the sea of white faces that he was making a point about race, Trump later said the quiet part out loud. “Every family in Minnesota needs to know about Sleepy Joe Biden’s extreme plan to flood your state with an influx of refugees from Somalia, from other places all over the planet,” he declared.

Trump’s ugly endorsement of race-based eugenics got national attention, but in a presidency filled with outrages, our focus quickly moved to the next. Besides, this wasn’t the first time we’d heard about these views. A “Frontline”documentary reported in 2016 that Trump believed the “racehorse theory” of human development that he referred to in Minnesota — that superior men and women will have superior children. That same year, the Huffington Post released a video collecting Trump’s statements on human genetics, including his declarations that “I’m a gene believer” and “I’m proud to have that German blood.”

On eugenics, as in so many areas, the scariest thing about Trump’s views is not the fact that he holds them, but that there is no shortage of Americans who share them. The United States has a long, dark history with eugenics. Starting in 1907, a majority of states passed laws authorizing the sterilization of people deemed to have undesirable genes, for reasons as varied as “feeblemindedness” and alcoholism. The Supreme Court upheld these laws by an 8-1 vote, in the infamous 1927 case Buck vs. Bell, and as many as 70,000 Americans were sterilized for eugenic reasons in the 20th century.

America’s passion for eugenics waned after World War II, when Nazism discredited the idea of dividing people based on the quality of their genes. But in recent years, public support for eugenics has made a comeback. Steve King, a Republican congressman from Iowa, tweeted in 2017, “We can’t restore our civilization with somebody else’s babies.” The comment struck many as a claim that American children were genetically superior, though King later insisted he was concerned with “the culture, not the blood” of foreign babies.

Eugenics has also had a resurgence in England, where the movement was first launched in the 1880s by Francis Galton, a cousin of Charles Darwin. In February, Andrew Sabisky, an advisor to British Prime Minister Boris Johnson, resigned after it was revealed that he had reportedly written blog posts suggesting that there are genetic differences in intelligence among races, and that compulsory contraception could be used to prevent the rise of a “permanent underclass.” Richard Dawkins, one of Britain’s most prominent scientists, added fuel to the fire by tweeting that although eugenics could be criticized on moral or ideological grounds, “of course” it would “work in practice.” Eugenics “works for cows, horses, pigs, dogs & roses,” he said. “Why on earth wouldn’t it work for humans?”

There is reason to believe the eugenics movement will continue to grow. America’s first embrace of it came at a time when immigration levels were high, and it was closely tied to fears that genetically “inferior” foreigners were hurting the nation’s gene pool. Eugenicists persuaded Congress to pass the Immigration Act of 1924, which sharply reduced the number of Italian, Jewish and Asian people allowed in.

Today, the percentage of Americans who were born outside the United States is the highest it has been since 1910, and fear of immigrants is again an animating force in politics. As our nation continues to become more diverse, the sort of xenophobia that fueled Trump‘s and King’s comments is likely to produce more talk of “better” genes and babies.

It is critically important to push back against these toxic ideas. One way to do this is by ensuring that people who promote eugenics are denounced and kept out of positions of power. It is encouraging that Sabisky was forced out and that King was defeated for reelection in his Republican primary in June. Hopefully, Trump will be the next to go.

Education, including an honest reckoning with our own tragic eugenics history, is another form of resistance. It is starting to happen: Stanford University just announced that it is removing the name of its first president, David Starr Jordan, a leading eugenicist, from campus buildings, and that it will actively work to better explain his legacy. We need more of this kind of self-scrutiny from universities like Harvard, Yale and many others that promoted eugenics and pseudo race science, as well as institutions like the American Museum of Natural History, which in 1921 hosted the Second International Eugenics Congress, at which eugenicists advocated for eliminating the “unfit.”

Trump’s appalling remarks in Minnesota show how serious the situation is now. Seventy-five years after the liberation of the Nazi concentration camps, a United States president not only spoke about “good genes” in racialized terms — he believed that his observations would help him to win in the relatively liberal state of Minnesota. It is crucial that everyone who understands the horrors of eugenics works to defeat these views — before they become any more popular.

Adam Cohen, a former member of the New York Times editorial board, is the author of “Imbeciles: The Supreme Court, American Eugenics, and the Sterilization of Carrie Buck” and, this year, “Supreme Inequality: The Supreme Court’s Fifty-Year Battle for a More Unjust America.”

PLEASE DONATE TO HELP OUR POLITICAL PRISONERS AND POWS!
YOU CAN DONATE ON PAYPAL TO NYCJERICHO@GMAIL.COM