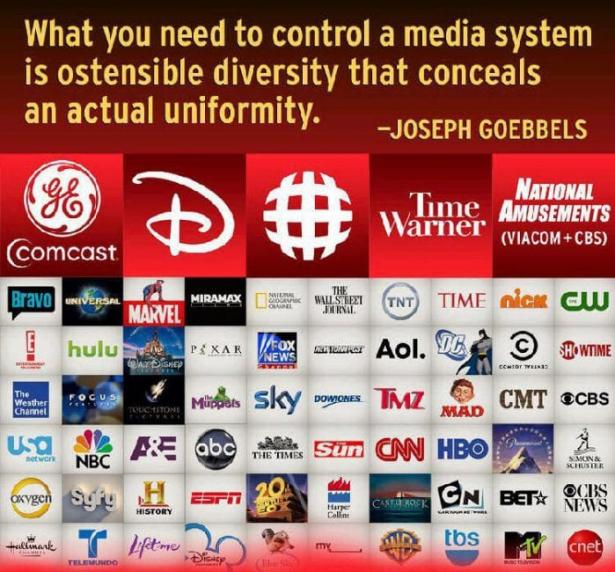 We are living in a time of universal mendacity, disinformation and propaganda. We can see this when we channel surf and scan the various news stations, we notice the similarity and sameness being broadcast whether the medium is allegedly “liberal” or conservative”, We notice there are only slight differences in the message. For example there are very few challenges to the “official narratives” whether they are about the JFK assassination, 9-11, the cause of the 2008 financial implosion, COVID or other events such as the recent assassination of the President of Haiti.

There is an African saying, “Truth is in the marketplace, but is anyone buying?” There is very little truth in the corporatist media these days, what we mainly get are teleprompter readers, stenographers, PR reps and cheerleaders for the government and corporations whose agendas are all too often identical at the expense of the masses. This is the classic definition and example of fascism, what Benito Mussolini called corporatism, the blending of corporations and the state. We are seeing this meld in real time on a daily basis. Not only is it corporatism but it is monopoly corporatism (fascism).

Investigative journalism is a thing of the past due to the influence of money, advertising and the profit motive. Most media are owned by the same groups of people, who control most of the stocks and the media is greatly influenced by the whims, wants and objectives of the advertisers which is the profit motive. The media creates and promotes a worldview, a fake reality the ruling classes want us to believe, acquiesce to and mindlessly follow. In some places this is called The Matrix. Author Eric Arthur Blaire better known by his pen name George Orwell called it Big Brother in his novel 1984. Many realize we are living in that dystopian world now and it may become far worse before it gets better.

The global elite are extremely powerful; they exert major influence not only on government, economic and social policy but also on many aspects of our daily lives. For example it was the global elites like the Rockefellers, Bill Gates, Warren Buffett, Klaus Schwab and others who pre-fashioned much of the response to the COVID crisis. This response was based upon conducted drills, simulations and test runs designed to accomplish exactly what the global cabal intended. “They planned and prepared for the coronavirus decades in advance. The infrastructure has been clearly set up over the last 2+ decades to ensure that when Operation Coronavirus went live, all the pieces would be in place to bamboozle and enslave people, forcing them into a place where they would gladly accept or beg for mass vaccination…” Nine Simulations Drills and Laws that Planned and Prepared For the Coronavirus by Makia Freeman https://thefreedomarticles.com/9-simulations-drills-laws-prepared-for-the-coronavirus/

These unelected elites are the ones who pushed to shut the economies down, promoted lockdowns, medical martial law and universal vaccination. Israel, Gibraltar, Belgium and Iceland are the most heavily vaccinated nations in the world; they are also experiencing upticks in COVID infections hospitalization and deaths by vaccinated people! Meanwhile India has seen a drop in infections with limited vaccines and Sweden and Denmark have ceased their restrictions altogether.

The global ruling class is on a roll; they have upped the ante, they have put their feet on the pedal in their drive for global domination and monopoly ownership. Their goal is a neo-feudal techno-fascist order with themselves on the top and us on the bottom. Do some research on what they are calling The Great Reset https://americanpolicy.org/2021/03/15/what-the-great-reset-will-really-do-to-you/, it will shock you.

To accomplish this social re-engineering they must lie to us using their 24/7/365 media/propaganda machine.  We are being lied to and bamboozled at every turn. I urge you to think for yourself, question everything and do not be so cavalier when it comes to your mind; menticide is real.

You Won’t See This in the Mainstream Media