Due to the intense interest, controversy and debate surrounding Dr. Manning Marable's biography of Malcolm X, the Institute of the Black World 21st Century will web cast its Forum this Saturday in New York as referenced in the promo card and Press Advisory inserted below. We are asking friends and allies from across the country to forward this information widely so that Black America and the Pan African World will be apprised of this important event.
Internationally acclaimed  author and journalist Herb Boyd, who will be a Panelist - herbboyd47@gmail.com  and Dr. Ron Daniels, Moderator - cmprnews@aol.com will also be available for media interviews to discuss the forum and promote the web cast.
The Web Cast will begin at 2:15 PM and can be accessed via IBW's web site at www.ibw21.org 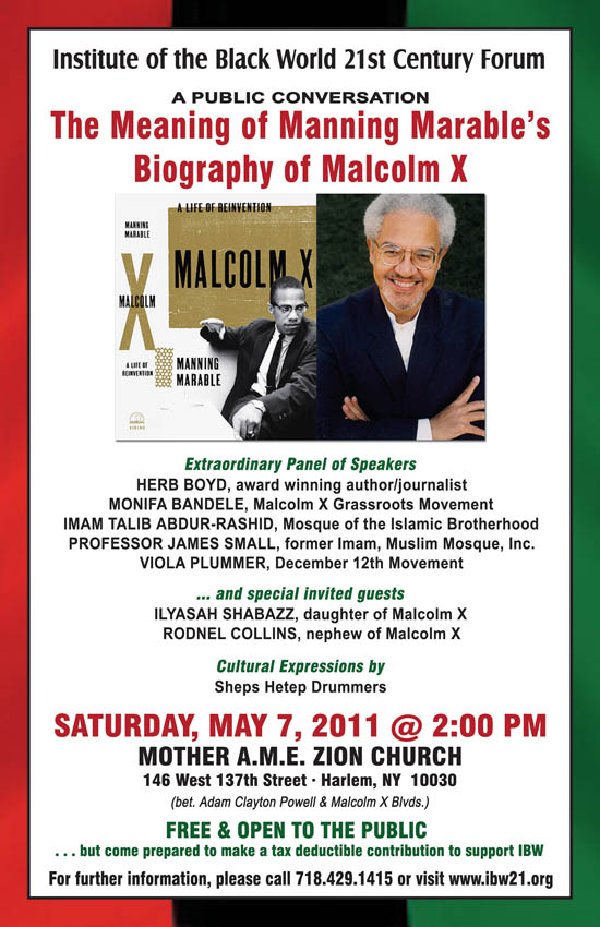 Nothing in recent years has provoked such a firestorm of controversy and debate as Malcolm X: A life of Reinvention, a biography of the iconic human rights leader, authored by the late Dr. Manning Marable.  Considered his seminal work by some observers, the biography makes claims that family members and numerous Malcolm devotees believe demean the legacy of the man Ossie Davis eulogized as  "Our Black Shining Prince." However, there are  others within the Black community who defend Marable's book as breaking new ground in revealing the extent of Malcolm's international reach as a Pan Africanist and the complicity of the New York Police Department in his assassination.

To separate fact from fiction and assess the contribution of Dr. Marable's biography of Malcolm X, the Institute of the Black World 21st Century is convening a Special Forum --  A Public Conversation: The Meaning of Manning Marable's Biography of Malcolm X, Saturday, May 7th, 2:00 PM at the historic Mother Zion AME Church, 146 W. 137th Street in Harlem.  Herb Boyd, award winning author and journalist; Monifa Bandele, Malcolm X Grassroots Movement; Imam Talib Abdur-Rashid, Mosque of Islamic Brotherhood; Professor James Small, former Imam, Muslim Mosque, Inc. and Viola Plummer, December 12th Movement will serve as Panelists for what promises to be a serious: examination of Dr. Marable's book. Ilyasah Shabazz, daughter of Malcolm X and Rodnel Collins, Malcolm's nephew have also been invited to participate in this important event.  Because of the intense interest in the subject around the country and internationally, IBW is making provisions to webcast the Forum.

Dr. Ron Daniels, President of IBW, will serve as Moderator.  Speaking to the importance of the Forum, Dr. Daniels stated:  "Malcolm X is a highly revered leader in the Black World. Any time anything is said or written that would appear to cloud his legacy it is bound to incite passionate reactions in our community. This is why it is imperative that we have a public conversation about Dr. Marable's book."   The Forum is free and open to the public, but contributions to support IBW's work are welcome. For further information call: 718.429.1415 or visit the website www.ibw21.org