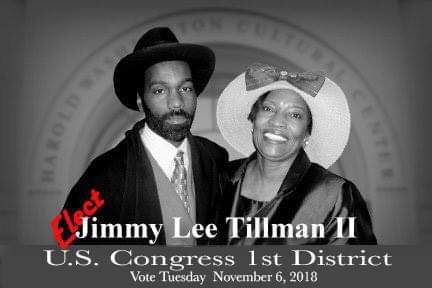 CHICAGO,IL Jimmy Lee Tillman, II says that he will "be a voice in the majority Party to speak out on issues related to the Black community". As a Black republican, Tillman will not be afraid to talk directly with President Trump regarding the many race related issues that are crippling the country. "Our representatives should not be in the business of ignoring and refusing to meet with the leader of this nation while our communities are in need of attention."

The 1st Congressional District is the largest Black district in the country and the Black community can be best served by a representative that is not "working to pay off his debts", but working with the leaders in the Majority party to bring these issues that "die at the hands of the Congressional Black Caucus,who depend on Democratic Party leaders to pick which ones to push and bury, to be called and voted on", replied Tillman.

"Our neighborhoods are being over run with crime and violence, this is not the time to be silent and resist", Tillman continued. "We must use every resource possible, including the President, to bring opportunities to the district."

Tillman is the oldest son of Dr. Jimmy Lee Tillman and former alderman Dorothy Wright Tillman. He is a father of three and a Central State University alum.

Tillman shared his responses to the Chicago Sun-Times editorial Q&A which draws a stark difference between Tillman and his opponent Rep. Bobby Rush.

Candidate for US House of Representative 1stDistrict

As a member of the U.S. House, what are or would be your top cause or causes?

As a member of the US House my top cause would be to repair the damage that the racial divide has caused America.

Please list three highly specific needs of your district that you would make priorities.

Access to affordable health care, access to better schools through school vouchers, and better roads and infrastructure so companies can invest in the 1st District.

Bipartisanship is virtually non-existent in the House. What would you do about that?

As a Black republican, I would meet with the members of the Democratically lead Congressional Black Caucus and take their concerns to the Majority party with the hopes of passing bipartisan legislation.

Are you convinced that Russia meddled in the 2016 presidential election in support of the candidacy of Donald Trump? Please explain.

I am not convinced that Russia meddled in the 2016 presidential election specifically in support of President Trump because the FBI said that Russia used Facebook and other social media to negatively influence both campaigns.

Do you support the investigation being conducted by special counsel Robert Mueller? Please explain

I do not support this investigation that was initiated over the firing of Director James Comey. The president had every right to fire Mr. Comey based off the recommendation from the Justice Department. This investigation has not found anything linking President Trump to Russia. It has only been used to justify the election loss of Hillary Clinton. America was not this angry when President Bush was accused of stealing the election from Al Gore in 2000.

If President Trump were to fire Mueller, directly or indirectly, what should Congress do?

If Trump were to pardon his former campaign aide Paul Manafort, what should Congress do?

The President of the United States has the constitutional power to pardon. There is nothing that Congress can do about that. If elected, I would request the pardons of as many of the countless number of citizens who have been incarcerated for non-violent drug offenses that is possible. Many of these citizens,that were heavily sentenced by the Clinton Crime Bill deserves a second look and a second chance.

Which three actions taken so far by the Trump administration do you most strongly support?

In no particular order.

I support President Trump's support of Historically Black Colleges and Universities. In March he signed the the $1.3 Trillion Federal Omnibus Budget that added money for infrastructure and financial aid for HBCUs, the Title III HBCU Program gained 34.9 MIL more in funding,which brought the discretionary total to $279 MIL, and the HBCU Capital Finance Program Fund will be increased by $10 MIL,bringing the total to $30 MIL,in order to provide financial resources at a lower interest rate for HBCUs to build new buildings on their campuses. I also support President Trump's expansion of the federally funded Apprenticeship Program to help workers. This will help train those that have been left behind and unable to adapt to the current economic trends and place students into better jobs without them going into debt, that may come from attending a four year college or university. Lastly, I support The First Step Act, which would place federal prisoners closer to home, allow more home confinement for lower-level offenders, and expand prison employment programs.

Which three actions taken by the Trump administration do you most strongly disagree with?

I had issue with the administration's mishandling of the situation with the illegal detainees at the southern border and the roll-out of the travel ban. As a republican voter, I feel that the Trump administration is fulfilling its campaign promises.

The Trump administration has taken action to roll back Obama-era policies aimed at curbing o change and limiting environmental pollution. The administration has done so in the name of supporting business growth and making the United States more energy self-sufficient. Most notably, the administration has begun to dismantle Obama’s federal rules over American coal plants, weakened automobile fuel-economy standards and ended American participation in the Paris climate agreement. What is your take on all this?

If these actions, taken by the Trump administration, has created a robust economy and high consumer confidence; opened up closed steel factories and coal mines;and generated unprecedented job growth in industries that were said to never return, then I am in favor of them. Who knows, it is possible that the local print media may be on the rise again as well.

To what extent is climate change a man-made phenomenon? How serious is the threat to our children’s future? What should be done?

By definition, climate is the statistic of weather over a long period of time. Weather is not constant nor controlled by man. The climate change “issue” is a man-made phenomenon that needs to be studied independently by scientist who are not beholden to corporations or special interest groups looking to influence legislation. Our children deserve the truth about this matter and shouldn't be frightened without a such a study.

What is the single most important action Congress can take to curb gun violence?

Being a Chicago resident, with the nation's strictest gun laws on the books and as many as 30 people shot each weekend, I believe more federal legislation is unnecessary. Not enough law abiding citizens have the option to protect themselves. If they do not carry a firearm they run risk of becoming a victim of a crime. If they do carry a firearm they run the risk of being shot by law enforcement. It must be noted that most gun-related crimes are carried out using illegally owned firearms. Citizens who legally own firearms use them for lawful purposes much more often than they are used to commit crimes. Congress should focus on the complex societal problems at the root of gun violence instead of creating new laws that violate Americans' constitutional rights.

Is the media the “enemy of the people”? Please explain.

It all depends on the lens one sees the story out of. As a Black American male, the media has portrayed us as violent, dead-beat fathers, uneducated and out of control, dope-dealing,drug addicted thugs. It very rarely show Black men in a positive light. This causes us to suffer a bias in the eyes of the police, the judiciary system, and in the broader community. While many may view these stories as Real News, there are those in my community that view them as Fake News. This type of coverage is dangerous and irresponsible. That makes it difficult to say if the media is the “enemy of the people” because it depends on the view one see the story.

As an editorial board, our core criticism of the tax overhaul legislation pushed through Congress last December is that it lowers taxes on corporations and the wealthiest Americans at a time of historic inequalities of wealth and income in the United States. We believe in free markets, but the ‘silent hand’ of the market does not seem to be rewarding merit fairly. What’s your position on last December’s rewrite of the tax code? Would you push for further changes, or for the law’s repeal?

Speaking of income inequality, top executives of America’s biggest companies saw their average annual pay surge to $18.9 million in 2017, even as the pay of ordinary workers has remained flat for a decade. What, if anything, should be done to address the growing gap in wealth and income?

A way to address this is to create a climate where small businesses can thrive in the inner cities. Business ownership is a pathway to creating wealth. With incentives and tax breaks these businesses will hire from the communities and create a strong local economy.

Would it be appropriate at this time for President Trump to invite Russian President Vladimir Putin to visit the White House? Why so, or why not

It is not appropriate at this time to invite Russian President Vladimir Putin to visit the White House until the Mueller investigation has come to a conclusion. This will bring closure to the 2016 Presidential election. Only then should the invitation be extended.

How would you assess and grade the Trump administration’s efforts to recalibrate our nation’s relationships with Korea, NATO and Russia?

In late June, the Supreme Court upheld the Trump administration’s travel ban on visitors and immigrants from seven countries, five of which have Muslim majorities. What is your view on this ban?

I believe the President, regardless of their Party, has the power and authority to keep America safe. I, as a civilian, do not have clearance to know if the threat is relevant or not so I must trust the President,

What three major reforms should be made to United States immigration policy?

Reform to the chain migration policy, overturn the Immigration Act of 1990, and place a cap on the numbers of immigrants we allow in the country.

I oppose chain migration because there are too many loopholes. I would not allow adults children, uncles, aunts, or cousins. Only immediate family, spouses, parents, and some cases grand parents. Host must be able to speak and read English before they can send for a relative.

What would you do, as a member of Congress, to improve race relations in the United States?

Some people are saying that since the election of President Donald Trump our country's race relations has reach an all time low. I will try to improve things by helping the President to understand the pain that Black America is suffering and has been suffering. I would take him on tour of blighted neighborhoods to show him the suffering. I would introduce legislation that could help repair the damage that has been inflicted upon Black Americans for 400 years. Outside of that, I will keep praying to God that life will get better for Black America.