(JAI:  Sent on by longtime comrade, Michael Letwin. The history of the organization below gives one a vast sweeping sketch of the revolutionary movements of the time period, especially so that of LA.   A video detailing the Red Tide's history can be viewed here.)

The Red Tide: A Brief History 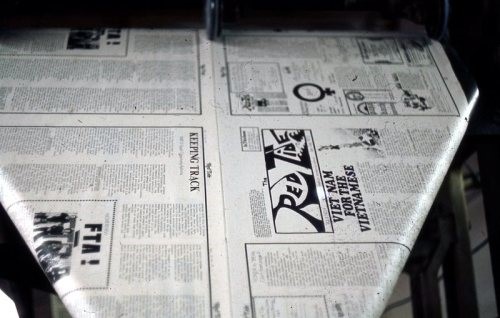 The Red Tide began as a radical underground newspaper collective at University High School (“Uni”) in predominantly white middle-class West Los Angeles in 1971. It ended a decade later as the predominantly Black, Detroit-based youth organization of the International Socialists. In total, forty-one editions of the newspaper were published.

Many of the founding Red Tiders had become activists in elementary and junior high during the 1960s. Raised at and around UCLA, and under the combined influence of the Old Left (some were red diaper babies), New Left, and Black freedom movements, they had marched for civil rights and against the Vietnam war; campaigned for the Peace and Freedom Party, Eugene McCarthy’s 1968 presidential campaign, Tom Bradley’s 1969 mayoral campaign, and the 18-year-old vote; fought for student rights; and frequented Papa Bach Bookstore and the Free Press Bookstore/Westwood Kazoo, where they devoured radical books, posters, the Black Panther newspaper, and the counterculture press.

By fall 1969, like the broader movement of which they were part, they had become increasingly radicalized by the cumulative impact of anti-colonial revolutions from Vietnam, to southern Africa, to Palestine; murder of Che Guevara; military coup in Greece; Tet Offensive; 1965 Watts Rebellion, assassination of Dr. Martin Luther King Jr.; Black Power salutes and student massacre during the 1968 Olympics in Mexico City; uprisings in France and Czechoslovakia; murders of Lil’ Bobby Hutton, John Huggins, Bunchy Carter, Fred Hampton, and other Black Panthers; My Lai massacre; People’s Park in Berkeley; and Ronald Reagan’s witch-hunt against Angela Davis.

In 1969-1970 – the apex of 1960’s mass movements — they picketed supermarkets for the farm workers’ grape boycott; mobilized for antiwar moratoriums; championed Huey Newton, the Chicago 8 and other political prisoners; joined the first Earth Day; sat-in to support the L.A. teachers’ strike; and were swept up in massive protests by students, G.I.s, and others that followed the invasion of Cambodia and massacres at Kent and Jackson State universities. They knew their way around the adult Left, from the Panthers, SDS and Yippies, to the Communist and Socialist Workers parties, and the esoteric News and Letters.

In 1970-1971, they bonded with college-age radicals of the White Panther-oriented Westwood Liberation Front, the newly-established Midnight Special Bookstore in Venice, and the L.A. chapter of the National Lawyers Guild.

In late summer 1971, these Uni High activists formed the Red Tide collective (or “staff”), prepared the first issue at the local National Lawyers Guild office, and then printed 1000 copies at the Peace Press in late October. On November 1, 1971, the first edition of the Red Tide newspaper appeared. Students snapped up the entire press run, while panicked school administrators suspended or expelled several staffers — some of whom then spread the Red Tide to neighboring Hamilton High (“Hami”) and other area schools.

The Red Tide visibly reemerged on March 14, 1972, when hundreds of students occupied Uni’s administration building to protest suspension of staffers distributing the paper’s second issue. The occupation was joined by radical Black students, bused from South Central Los Angeles as part of a limited desegregation program.

In September 1972, the Red Tide filed the first of a series of lawsuits in which the California Supreme Court ultimately upheld students’ free speech rights.

In 1973-1974, it joined protests against the CIA coup in Chile, LAPD massacre of the Symbionese Liberation Army, and the visit by the Shah of Iran; published a groundbreaking expose of Israeli ethnic cleansing against Palestinians during the 1948 Nakba (“Catastrophe”); and supported the Farah Pants and Sloan Rubber strikes. In order to build a more multiracial membership, Black Red Tide members began to organize at Locke High School in Watts, and the paper’s distribution was expanded to other schools across the city.

Together with close Red Tide allies in the predominantly-Black, South Central-based Socialist Collective, a number of Red Tide members gravitated toward the International Socialists (IS). Founded as a national organization in 1969, and with roots in Trotskyism, the “Third Camp” IS emphasized both anti-capitalism and anti-Stalinism; workers’ democracy; and rank-and-file worker revolt in basic industry, as exemplified by the Dodge Revolutionary Union Movement and League of Revolutionary Black Workers in Detroit, where the IS established its national headquarters across from Henry Ford’s first assembly plant.

In Los Angeles, the Red Tide worked with the IS to support rank-and-file caucuses in various unions; formation of the Coalition of Labor Union Women (CLUW); the UFW boycott of non-union lettuce and Gallo wine; defense of the Attica Brothers; and solidarity with the Portuguese Revolution of 1974, and South African anti-apartheid movement.

In fall 1974, the Red Tide began its third year with protests against undercover police in the L.A. schools. Through the IS, it also built close ties with the high school-based Contra Costa Socialist Coalition (CCSC) in the Bay Area city of Concord.

In December, the two groups met at UCLA to refound the Red Tide an IS youth group. During the next year, this expanded Red Tide sought to build multiracial branches in Los Angeles and Oakland, while working with the IS to expand nationally.

In fall 1975, a small cadre of Red Tiders from the two California branches established their new headquarters in Detroit, where they soon conducted joint campaigns with the IS to defend school busing against racist violence. By distributing the newspaper and campaigning against racial conflict at schools throughout the city, they began to recruit both local Black and white members, some with their own history of political activism.

In spring 1976, membership mushroomed through the Red Tide’s campaign to free Gary Tyler, a Black teenager in Louisiana who, at age 14, had been wrongly convicted — and sentenced to death — for killing a white student during a racist mob attack on school busing. Gaining rapid momentum, the Red Tide worked with Rosa Parks and other civil rights leaders to prevent Gary’s execution; his sentence was commuted to life, and he was released only in April 2016, after forty-one years at Louisiana’s notorious Angola penitentiary.

Red Tide members also joined such IS trade union campaigns as the Coalition for a Good Contract (in the UAW); Teamsters for a Decent Contract (later Teamsters for a Democratic Union); and UPSurge, the Teamster rank-and-file group at UPS. In response to the June 1976 massacre of students in Soweto, South Africa, the Red Tide and IS escalated their anti-apartheid solidarity work.

Through this process, the Red Tide soon became a predominantly Black organization, with new branches in Chicago, Cleveland, Pittsburgh, and elsewhere.

By late 1976, the IS began to implode. In March 1977, several Red Tiders left with the breakaway International Socialist Organization (ISO). The Red Tide itself remained with the IS and continued to campaign against police abuse, the Ku Klux Klan, Nazis, and apartheid South Africa. In the early 1980s, both the IS and Red Tide disbanded.

The Red Tide newspaper and related materials are available online on this website.

From: John A Imani