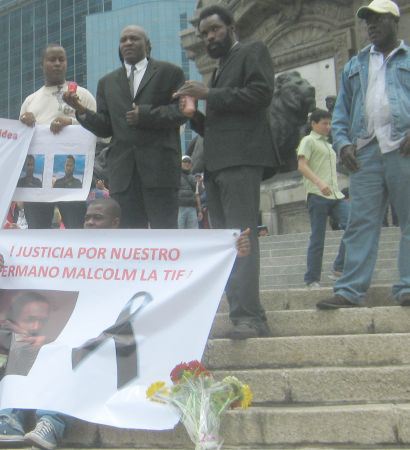 BABA ZAYID MUHAMMAD'S STATEMENT OF SOLIDARITY
WITH THE AFRO-MEXICAN PROTEST AND FAST FOR MALCOLM LATEEF SHABAZZ**!!!

I proudly stand with the young people in Mexico City, boldly, proudly and with great dignity, as they make their stand for ju...stice our beloved Malcolm Lateef Shabazz and around the question of race in that country!...

For seven days, now, they have been fasting to get a full investigation into lil Malcolm's death! What they are demanding is correct!

Fasting for social justice is as huge an undertaking as someone fasting to please almighty God...

I ask Muslims allover the world in full gear for Ramadan to be in solidarity with this fast and protest.
I will seek to organize young people...from the 'generation nex'...'nephew' was trying to inspire!...to create caravans in lil Malcolm's name to roll into Harlem, New York for the Million Youth March 15th anniversary on September 7th, and in the language of a hip hop classic "and on and on and on on and on"!...

Justice for lil Malcolm!
By Any Means Necessary!
Black Power!
All Power to the People! Free the Land!
Free All Political Prisoners!
No to Repression!
No to Mass Incarceration

Seize the Time! This is our time!

For your special place in the whirlwind…

*Baba Zayid is the Nat’l Minister of Culture for the New Black Panther Party and the Press Officer for the Malcolm X Commemoration Committee…A veteran of 35 years of activism, organizing and protest, he can be reached at babazayid@yahoo.com and on FB Facebook.com/Zayid Muhammad…

**After 7 days of peaceful and disciplined protest by the Citizens Committee of AfroMexicans Naturalizados Defences, the Mexican City Police forcefully moved and putdown the demonstrators…