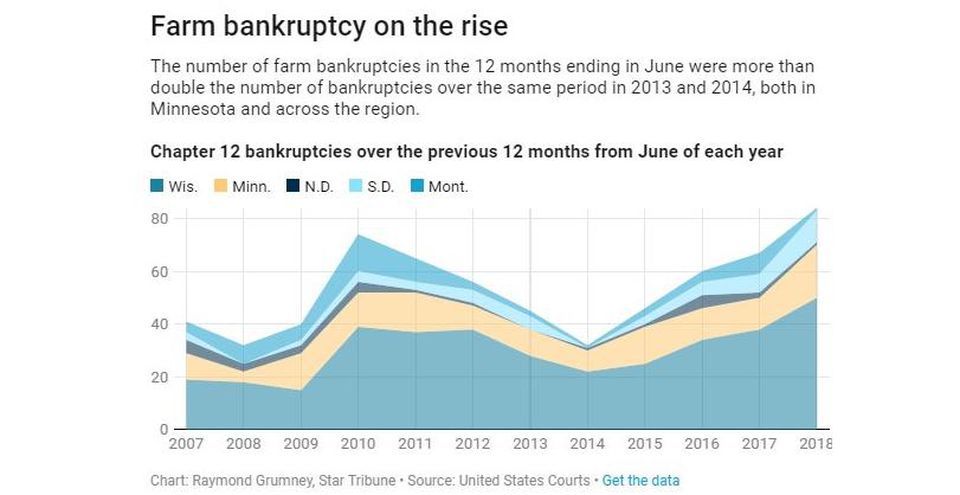 US farmers already hard hit by devastating floods and storms are also reeling from Trump’s ill advised trade war against China. A trade war is one thing, but trade wars coupled with the adverse weather conditions have put US farmers in an untenable position. “Record floods have devastated a wide swath of the Farm Belt across Iowa, Nebraska, South Dakota and several other states. Early estimates of lost crops and livestock are approaching $1 billion in Nebraska alone. With more flooding expected, damages are expected to climb much higher for the region. As river levels rose, spilling over levees and swallowing up townships, farmers watched helplessly as the waters consumed not only their fields, but their stockpiles of grain, the one thing that can stand between them and financial ruin.” https://www.reuters.com/article/us-usa-weather-agriculture/us-farmers-face-devastation-following-midwest-floods-idUSKCN1R12J0

The massive flooding has put US farmers in financial jeopardy with many facing ruin and bankruptcy. “Federal data shows bankruptcies in major farm states last year rose to the highest level in at least 10 years. According to the 7th Circuit Court of Appeals in the Midwest Illinois, Indiana and Wisconsin saw twice as many farmers declared bankruptcy in 2018 compared to those that did during 2008. In the 8th Circuit from North Dakota to Arkansas, bankruptcies were up 96 percent. In the 10th Circuit including Kansas Colorado and Oklahoma, they rose 59 percent.  Last year, farm debt rose to $409 billion, with the average size of loans in the 4th quarter at $74,190, the highest 4th quarter level in history. However, for perspective, Chapter 12 bankruptcy filings when looking at nationwide numbers are still below the highs of 2010. ” Farmer Bankruptcies on the Rise https://www.agweb.com/article/farmer-bankruptcy

To add insult to injury, Trump’s trade wars and the tariff tit for tats with China are exacerbating the plight of US farmers.  China is one of the US’s major trading partners especially foodstuffs.  China imports more US agricultural products than it exports to the U.S. China is the number one importer of US soybeans, feed, animal hides and alfalfa, number two in hay, number three in dairy and poultry, number four in processed food, pork and beef and number five in wheat. The US exports 17% of its goods to China; only Canada 15% and Mexico 14% come close. So you can see how a prolonged trade war with China would be devastating to US farmers!

From an economic perspective, Trump’s trade war is not having the desired effect. Trump always talks about the trade imbalance or a trade deficit between the US and China; but in the case of agriculture the deficit is in the US’s favor! Trump’s policies are putting this advantage in jeopardy because China is going elsewhere for their agricultural needs.

“China’s soybean processors are snapping up record volumes of Brazilian cargoes for shipment in the fourth quarter, curbing purchases of U.S. crops in North America’s peak marketing season as the trade war between Washington and Beijing intensifies. That shift away from U.S. beans by China, which takes more than 60 percent of the commodity traded worldwide, will pile further pressure on benchmark Chicago Board of Trade prices Sv1 after they plumbed 10-year lows last week.  China in July imposed a retaliatory 25-percent import duty on U.S. soybeans as part of the tit-for-tat trade dispute between the world’s top two economies, conflict that gathered steam this week with the introduction of fresh tariffs on other products.” https://www.reuters.com/article/us-usa-trade-china-soybeans/crop-chop-china-shuns-u-s-soybeans-amid-trade-war-turns-to-brazil-idUSKCN1M60UT

While Trump’s hard core supporters cheer his threats of tariffs and trade wars as part of his Make America Great Again meme, sane economists and mature people know tariffs and trade wars have unintended consequences. Trump has a lot of support in the Mid-West amongst farmers. These farmers are hard pressed to keep a stiff upper lip and continue to cheer his policies as they watch their bills and debt pile higher while their revenues shrink and shrivel. This could translate in defections at the polls by his base of bankrupt farmers, which is why Trump is offering them more federal relief. In effect Trump is giving money we don’t have and cannot afford to farmers to soften their suffering caused by his negotiation and policy missteps. Under Trump and his tax cuts the federal deficit has sky-rocketed. “Recent data from the Treasury Department shows the U.S. is already running a deficit of $691 billion. That's already higher than all but five full-year deficits in U.S. history, according to an analysis by the Peter G. Peterson Foundation, a bipartisan nonprofit that focuses on the national debt. Since taking office in 2017, President Donald Trump has signed a $1.2 trillion tax cut into effect and proposed large spending hikes in his budget outlines. Those hikes in outlays and cuts to revenue were responsible for 60 percent of this year's budget deficit, according to analysis by the Committee for a Responsible Federal Budget. ” https://www.newsweek.com/trump-budget-spending-tax-policy-cbo-1413459

Tariffs are used to protect a nation’s businesses and industry against foreign competition. Unfortunately for us Trump fails to realize the US is no longer a manufacturing giant; by deliberate design US industries and manufacturing jobs have been shipped overseas to increase profits of the corporations!  Contrary to Trump’s bombastic rhetoric, they are not repatriating to the US.

“A.T. Kearney publishes an annual study on reshoring. Their July 2018 release - their fourth annual - Reshoring Index - shows record imports from traditional offshoring countries in 2017. ‘Imports of manufactured goods into the United States from the 14 largest low-cost-country trading partners in Asia rose by a staggering $55 billion, or 8 percent - the largest one-year increase since the economic recovery of 2011... Relative growth of imports from the low-cost country trading partners has now outpaced relative growth of US manufacturing gross output in four of the past five years and eight of the past 10 years, showing a clear direction away from significant reshoring. Since 2013, when A.T. Kearney first started studying reshoring as a phenomenon, imports of manufactured goods from the 14 largest low-cost countries have increased by $118 billion, or 19 percent, while US manufacturing gross output has grown by only $81 billion, or 1 percent.’” U.S. Manufacturers Are Not Reshoring Steve Banker https://www.forbes.com/sites/stevebanker/2018/07/11/u-s-manufacturers-are-not-reshoring/#2e7dd68a460c

In reality Trump’s tariffs are a malicious tax on consumers who pay the increased costs of the tariffs not the exporting nation! “The Peterson Institute for International Economics estimates the China tariffs amount to a tax hike of about $550 per American family. If Trump goes to 25 percent tariffs on over $500 billion in Chinese imports — hitting nearly every category of consumer goods from clothing and diapers to electronics — it could mean a $2,200 tax hike on the average family of three. By contrast, Trump’s tax cut gave middle-income families a tax cut of about $800, according to the Tax Policy Center…Just last week, retailing giant Walmart warned tariff increases will cause prices for consumers to rise. An analysis by CNBC found that revenue from Trump’s China tariffs, now estimated at around $72 billion, would amount to the largest tax hike as a percentage of the economy since 1993.” Dark Clouds Hang Over Trump’s Trade War Ben White https://www.politico.com/story/2019/05/20/trump-trade-war-2020-1455474