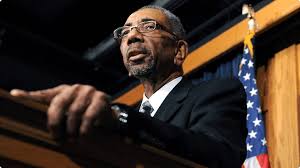 Chicago, IL As we approach the 25th anniversary of the signing of the 1994 Clinton Crime Bill, the Black community is still feeling its negative effect and wondering why those who supported it haven't done anything to change it. -->CLICK HERE FOR FULL VIDEO<--

William Douglass said "I YouTube Clinton Crime Bill and realized that my own congressman was responsible for this, his apology was many years too late for me."

The video was Tamron Hall of MSNBC interviewing Congressman Bobby Rush during the 2016 campaign about the effects of the Clinton Crime Bill on the Black community. In the heartbreaking testimony the incumbent said,

Jimmy Lee Tillman, II, who is running in the midterms to replace Rush replied,

"We lost a whole generation, mothers, fathers, brothers, and sister. We can no longer tolerate this, our children are the future. If the Old Guard are backing this they share the blame of our lost generation and they must tell the children why we lost this war."