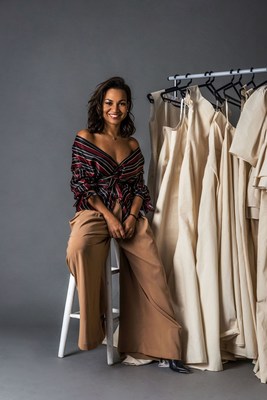 Rose Palhares will be the fashion designer responsible for Mastercard's fashion lounge, where hundreds of exclusive creations will be available during the most symbolic international event and the world's biggest film festival, the Cannes Film Festival.

Taking place from 8 to 19 May in Côte d'Azur, France, the Cannes Film Festival continues to drive the development of cinema, helping celebrate the international film industry. Rose Palhares, as the fashion designer and creator of the Mastercard fashion lounge collection, is back at the festival for the second time at the invitation of the brand.

Rose Palhares, General Director and founder of the brand says: "The exclusive collection of the Mastercard fashion lounge at the Cannes Film Festival has a very unique identity, because I was inspired by warm and festive colours and smooth, albeit elaborate and bright, textures. I find that this collection follows a trend of garments that can be transformed and break with traditional precepts, such as long dresses with low necklines and asymmetric slits. Simultaneously, I want silhouettes to pronounce themselves in absolute precision, as they seal values of autonomy, elegance and feminine mutability." She adds: " The sophistication of the collection's 600 items, featuring materials such as lace, sequins, silk, organza and taffeta details may seem unusual, but after all, I like to discover fabrics and their enhanced textures, because my work is not only fashion, I also interpret it as art."

The Rose Palhares brand, present in Portugal (an atelier in the heart of the Portuguese capital) and in Angola (on the Island of Luanda), specialises in tailor-made fashion and ready-made clothing, with most African designers following suit.

Born in Angola, Rose Palhares also holds Portuguese nationality. She has a degree in Fashion Design from the University of Vale do Itajaí, in the Brazilian state of Santa Catarina. She has won several prizes: at the Moda Luanda in 2017 and 2013, and was also described by Vogue Italy in 2016 as the Most Interesting Designer of Angola. Fashion Diva of Angola and Best Designer of the Year in 2017, Rose Palhares was also acclaimed International Designer of the Year at the Angola Fashion Week 2015, Woman of Merit by the GMA-Grupo das Mulheres Africanas (African Women's Group) (in 2016) and "one of five designers to follow closely in the years ahead" by Elle South Africa in 2016.