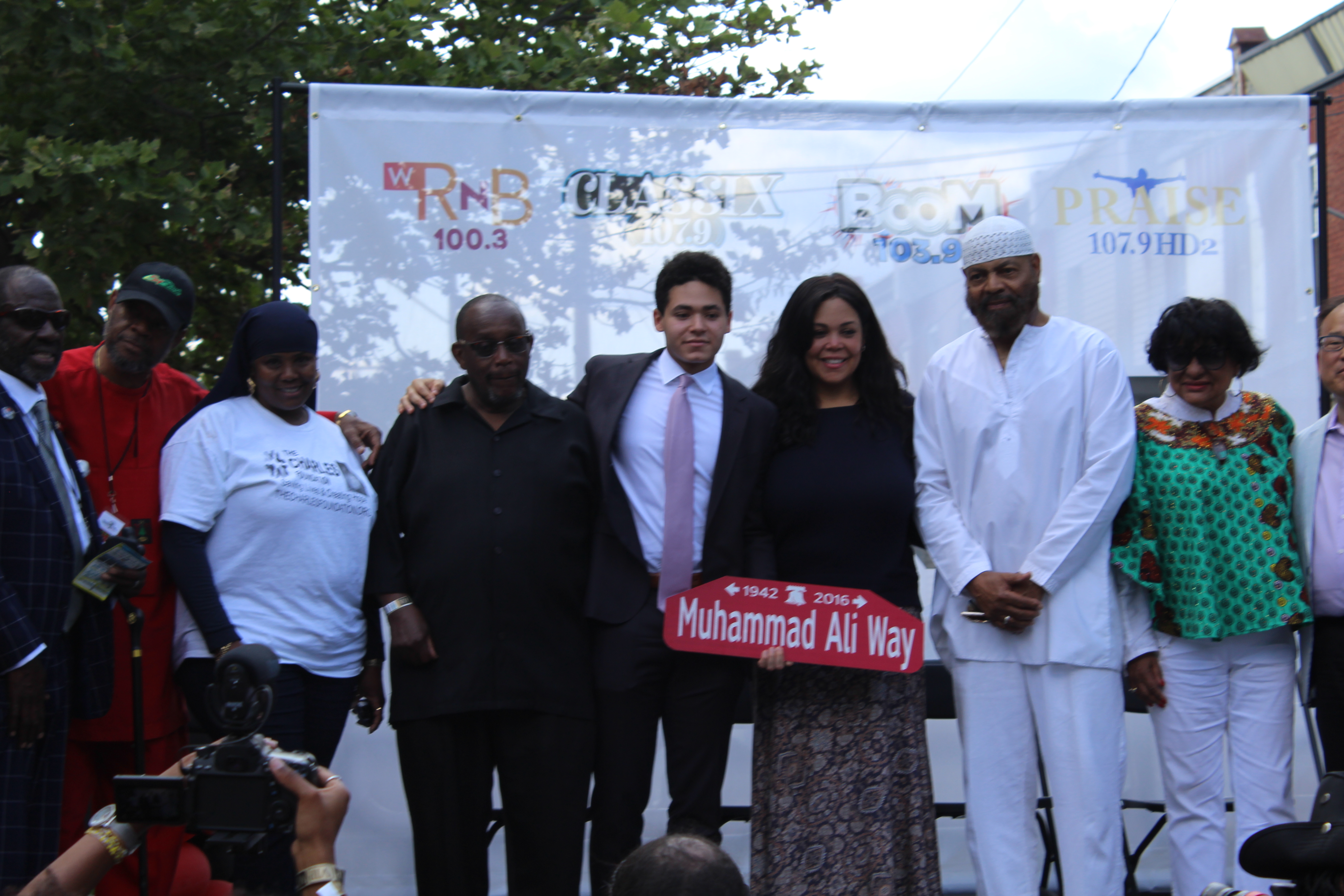 As part of the forth annual Philadelphia Juneteenth celebration the whole of 52nd Street in West Philadelphia has been officially renamed and rededicated to Muhammad Ali. Philadelphia Mayor Jim Kenny Councilwoman Jannie Blackwell, Councilman David Oh, Congressman Dwight Evens, Minister Rodney Muhammad and representatives from the nation of Islam and Muhammad Ali’s daughter and grandson participated in the street renaming ceremony.

The renaming initiative took over a year to complete. It was spearheaded by Brother Faruq and Brother Samir friends of the former champion who enlisted the help of Councilwoman Jannie Blackwell to initiate the needed legislative actions and garner support from her colleagues in city council to make it happen.

The 2019 Juneteenth Parade and Festival was scheduled to be held on 52nd and the street renaming was included in the Juneteenth itinerary and schedule.

Juneteenth is the oldest African-American celebration in the nation dating back to June 19th 1865 when enslaved Blacks were informed the War Between the States had ended and they were free. Union Army Major Gordan Granger and his troops landed in Galveston Texas following General Robert E. Lee surrender on April 9, 1865. The war was over but the enslaved Africans in Texas were unaware of the war’s end or their freedom from bondage! Major Granger and his troops informed both the enslaved Blacks and the recalcitrant whites the war was over, that hostilities were to cease and all enslaved persons were free.

The jubilation at the news was widespread throughout the region and many feel this was the first event Blacks had real reason to celebrate in this country. In many places June 19th became a traditional day of celebration. Over the years more and more African-Americans have pushed for June19 and Juneteenth as it was called to become a local, state or national holiday, especially as more realize that Lincoln’s Emancipation Proclamation did not liberate enslaved people in the Confederacy because neither Lincoln nor his Emancipation Proclamation had the jurisdiction or authority to do so.

Over the years Juneteenth recognition and celebration has waxed and waned but is not experiencing a resurgence of interest and participation.  Texas became the first state to make Juneteenth a state holiday in 1980 due to the efforts of a Black state legislator named Al Edwards.

In Philadelphia the Juneteenth parade started three years ago under the direction of Kenny Gamble, Ali Salahuddin, community activists like Michael Coard, civic leaders and key local, state and national elected officials. The parade has grown each succeeding year, this year 1,800 participants have registered and over 10,000 attendees were expected.

Recently Juneteenth was recognized by the Pennsylvania legislature and Governor Tom Wolf as a state holiday. Ron Brown the Mid-Atlantic representative of the National Juneteenth Organization was instrumental in getting Juneteenth recognized as a holiday in Pennsylvania. “It’s a legal holiday but people don’t get paid for being off. The next thing is to make sure people can get paid, that’s the next step. That was all part of the agreement that was made, that we will do this incrementally then move so like for Martin Luther King Jr.’s holiday people get paid for being off. We’re going back to the table in about two years to make sure it’s a full holiday.”

Saturday’s weather was beautiful. Juneteenth 2019 was a wholesome intergenerational family event. The energy and excitement were so positive attendees got an even greater appreciation of the meaning of Juneteenth and as an added plus, 52nd Street was renamed Muhammad Ali Way.