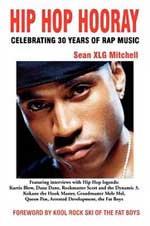 (BlackNews.com) -- The new book Hip Hop Hooray: Celebrating 30 Years of Rap Music by Sean XLG Mitchell celebrates and highlights outstanding events and achievements in rap music over the last 30 years. Kool Rock Ski of the legendary rap group the Fat Boys pens the introduction as the book details the success of mainstream artists such as Nicki Minaj, Lil Wayne, Eminem, and Jay Z to legends like Run-DMC, Grand Master Flash, NWA, and Public Enemy. From hit films like Krush Groove to Hustle & Flow, every era is explored and documented.

Using over 30 years of experience in rap music, Sean XLG Mitchell chronicles events from the past and present and adds shine with exclusive interviews with hip-hop icons to include Dana Dane, Kurtis Blow, Grand Master Mele Mel, The Fat Boys, Queen Pen, Arrested Development, and more! Sean XLG reveals a vast array of feats, from the extraordinary and outrageous to the noble and obscure that is both informative and fascinating.

"Pac (Tupac) is not here. People don't know I was with him two days before he got killed, me and Suge. I was on the set with him and Jim Belushi (Gang Related) and we were starting this thing together called One Nation with Spice 1." -- Kokane

About The Author:
Sean XLG Mitchell is the ultimate hip-hop griot. He began his career promoting platinum hit makers from Rockmaster Scott and the Dynamic Three to M.C. Hammer. As an artist, Sean XLG (X-treme Lyrical God) recorded several underground hits as a member of Unlimited Skills and is the first rapper to win a national music competition. He currently works as a freelance writer and is the creator of the hip-hop category Adult Contemporary Rap.

About The Book:
Hip Hop Hooray: Celebrating 30 Years of Rap Music is published by Amber Communications Group and is available online at Amazon.com and Barnesandnoble.com and major bookstores everywhere.