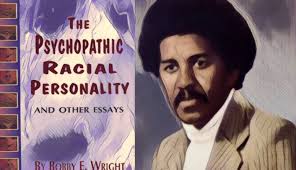 Menticide: literally mind murder, brainwashing, the systematic attempt to break down one’s beliefs, attitudes, and allegiances, in favor of the adoption of those of another.- Dictionary of Psychology page 279

The late great Dr Bobby E. Wright an Afrocentric Psychologist postulated that African people are being subjected to a campaign of menticide, the deliberate attempt to destroy our minds as part of an overarching program of genocide. In an essay entitled The Psychopathic Racial Personality Wright stated Europeans no longer need cheap Black labor, consequently Black people have become a threat and liability to their system. He said, “As a consequence (of our liability), the major research that White scientists are involved in today is genocidal in nature e.g. nuclear warfare, population control, medication control, genetic engineering, psychosurgery, electrical stimulation of the brain and the highly complex science of behavioral technology.”  The Psychopathic Racial Personality and Other Essays page 1 Third World Press 1984.

When one looks at current events we can see Dr. Wright who wrote this particular essay in the 1980’s was extremely prophetic. Today’s ruling class is rapidly moving to establish a technocracy: a society ruled and managed by a small cabal using technology as their tool of governance, surveillance and control. The technocrats will set and manage policy based upon the values as those who own the companies and governments they work for.

The interesting thing is, the same thing Wright said about the ruling class no longer needing Black labor is now true for whites. Robotics, automation, artificial intelligence and other forms of technology are rendering more and more jobs obsolete. Projections for the short, intermediate and long term indicate massive job losses in numerous fields. What is being planned for those who are displaced by technological disruption? This is an issue for another day but you can see some information about job obsolescence here https://www.iotforall.com/impact-of-artificial-intelligence-job-losses and here https://blog.bismart.com/en/artificial-intelligence-future-of-work.

What does this have to do with menticide you ask? Several weeks ago I shared how the super rich sponsored and supported the eugenics movement beginning the early twentieth century to the present. I wrote, “Eugenics was a philosophy and movement by Europeans that called for the elimination of society’s ‘undesirables’ via sterilization, birth control and in extreme cases mass murder. Adolf Hitler was a eugenicist as were people like John D. Rockefeller, Theodore Roosevelt, Alexander Graham Bell, Helen Keller, Winston Churchill, Margaret Sanger, John Harvey Kellogg, Herbert Hoover, John Maynard Keynes and surprisingly W.E.B. Dubois.” https://jrswriter.wordpress.com/2020/08/24/eugenics-and-you-part-1/

Eugenics is population control and one way to control population is through brainwashing, mind control and menticide. Eugenicists no longer talk about good genes, preventing feeblemindedness and crime. Now they talk about over population, food security and the threat humans pose to the planet. As I pointed out in the articles the super rich’s goal is global ethnic cleansing, actually doing away with billions of people.  The ways they do it are through: wars, environmental poisoning and ecocide, induced poverty, created famines, biological/chemical attacks and sterilization programs. They also use psychological warfare, psychological operations (psy-ops) and mind control. The media coverage of COVID is a psy-op deliberately designed to induce fear, dread and hysteria. We now know the condition is not as lethal as they make it out to be. https://www.newsbreak.com/new-york/new-york/news/2057144484099/yikes-new-york-times-estimates-90-of-positive-covid-test-results-really-are-negative

Take responsibility for your mind and your overall health. Protect your mind by limiting the media you consume. Monitor your thinking; be mindful of your thoughts and feelings. Don’t wrestle with your negative thoughts; this only gives them more power to impact your emotions. Allow them to flow freely and gently replace them with different images and ideas. Learn to relax, meditate and practice deep breathing. Boost your immune system, think optimistic thoughts, eat nutritious foods, drink plenty of clean water and get adequate sleep. Free your mind, the rest will follow.