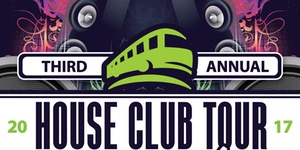 CHICAGO, IL Chicago's Southside is home to many local, small, and family owned businesses. Some are well-known establishments on busy thoroughfares, while others are new start-ups located on up and coming blocks in redeveloped neighborhoods. Several of these businesses have joined the 3rd Annual House Club Tour (HCT) Pub Crawl for the much-anticipated kickoff of the holiday and House music season.
On Wednesday, June 28, 2017, thousands of House crawlers will "Get on the Bus" as the organizers House Club Tour, LLC introduces them to an expanded group of restaurants, bars, and a brewery. This showcase will highlight local small businesses and celebrate the sub-genres of House Music played throughout the city of Chicago with a talented group of selected DJs.
Norm's Bistros located in Kenwood and Frances Cocktail Lounge, a staple in the Park Manor neighborhood are original stops on the fun filled safe tour around Chicago's Southside. Frank Smith, of Frances says the HCT crawl buzz usually starts in February with his customers anticipating the event. "People are actually scheduling the following day off of work, just so they don't miss out on the fun! I personally like the example it shows our younger generations how to party peacefully and respectfully."
Peyton Willborn, owner of Truth Italian Restaurant a new hip eatery in Bronzeville that opened two years ago, and other family members who help out are looking forward to the busloads of patrons expected. "We are so thrilled to be joining House Club Tour this year. We can't wait for Chicago people who have not experienced Truth's food and ambiance to do so."
The South Loop's Baderbräu Brewery opened up this past spring and is included on the route after a high demand from past participants to include a brewery. Other businesses participating include Family Den, Bassline, Blu 26, Promontory, Murphy's Lounge, Renaissance Bronzeville, The New Dating Game, Red Pepper Lounge, and Lemelle's Luxury Lounge.
Last year over 1500 House Music lovers attended this exciting event and more are expected to enjoy the various sounds that include Afro House, Classic House, Chicago Old School, Down Tempo Disco, Funk, Global House, Latin, Studio 54, Underground, and Vinyl. Because of the successful response to pre-sale tickets, organizers have added more venues and buses that will depart from various locations rotating every 30 minutes.