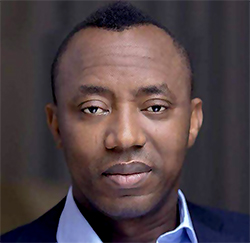 Sowore Verified shares - Bergen County, NJ resident, Omoyele Sowore, founder of NY-based Sahara Reporters, has been illegally imprisoned for more than 117 days in Nigeria.In a recent crackdown on freedom of the press, Sowore and several journalists have been detained by the Nigerian government following their widespread reporting on human rights violations, corruption and political misconduct. Human rights and press freedom organizations including Robert F. Kennedy Human Rights, The Clooney Foundation for Justice and Human Rights Watch have expressed concern against the Nigerian government's muzzling of the media and advocated for Sowore's safe return home. On November 20, 2019 Amnesty International declared Sowore a Prisoner of Conscience, a person who has been imprisoned for holding political or religious views that are not tolerated by their own government.

In recent weeks, friends, neighbors and members of the New Jerseycommunity gathered in yellow ribbon tying ceremonies (media assets) across Yele's home state to raise awareness of Sowore's illegal detention and advocate for his safe return home. The most recent ceremony took place outside the offices of Senator Menendez and Senator Booker in Newark, NJ on November 26, 2019. Supporters tied 116 Yele Ribbons, one for everyday he has been imprisoned, to rally continued support for Sowore. The yellow ribbon has long been a symbol for absent and missing loved ones. Sowore supporters will continue to speak out and champion a growing global coalition for human rights and free speech.

"My husband will not be at home with me and our children to celebrate Thanksgiving this year.  We miss him dearly and continue to hope and pray for his safe return home," said Yele's wife, Opeyemi Sowore. "I am truly humbled by the outpouring of love and support from our community here in New Jersey, human rights and press freedom organizations, U.S. government officials and supporters from around the world who are shining a bright light on basic human rights violations against my husband and other journalists in Nigeria."

Yele Sowore was abducted by Nigeria's Department of State Security Services (DSS) on August 3, 2019 shortly after scheduling a peaceful protest calling for the Nigerian government to end wholesale corruption, institute minimum wages and guarantee education. Sowore was visiting Nigeriawhen he was arrested. His trip back to Nigeria was the first since Sahara Reporters published an investigation that revealed the loss of about USD $1.4 billion by Nigeria's Central Bank in a failed private investment scheme. Sowore was detained for over 48 hours without arraignment in court and was not permitted access to lawyers, family or medical personnel, a breach of Nigeria's constitution. This pattern of injustice continued for 116 days with Nigeria's State Security Service violating court orders to release Sowore on bail twice. Sowore's trial resumes on December 5, 2019.

"The right to peaceful protest is a fundamental human right guaranteed under both Nigerian and international law. I stand with the human rights and the international community in declaring that the continued detainment of Mr. Omoyele Sowore is a flagrant violation of his human rights," said Representative Karen Bass, Chair of the Congressional Black Caucus and the House Foreign Affairs Subcommittee on Africa. "I also stand with the international community in urging the AU and UN Special Rapporteurs to secure his immediate release from detention."

Recent media reporting highlights a concerning trend of journalists and bloggers currently imprisoned in Nigeria. These arrests are occurring amidst growing concerns related to a social media bill that the Nigeran Senate advanced last week, under which police could arrest people whose posts are thought to threaten national security, sway elections or "diminish public confidence" in the government, according to the draft text. Authorities could also cut the Internet access of those that violate the regulation. A movement has erupted on social media with thousands expressing concern of censorship and oppression of free speech using the hashtag #SayNoToSocialMediaBill.