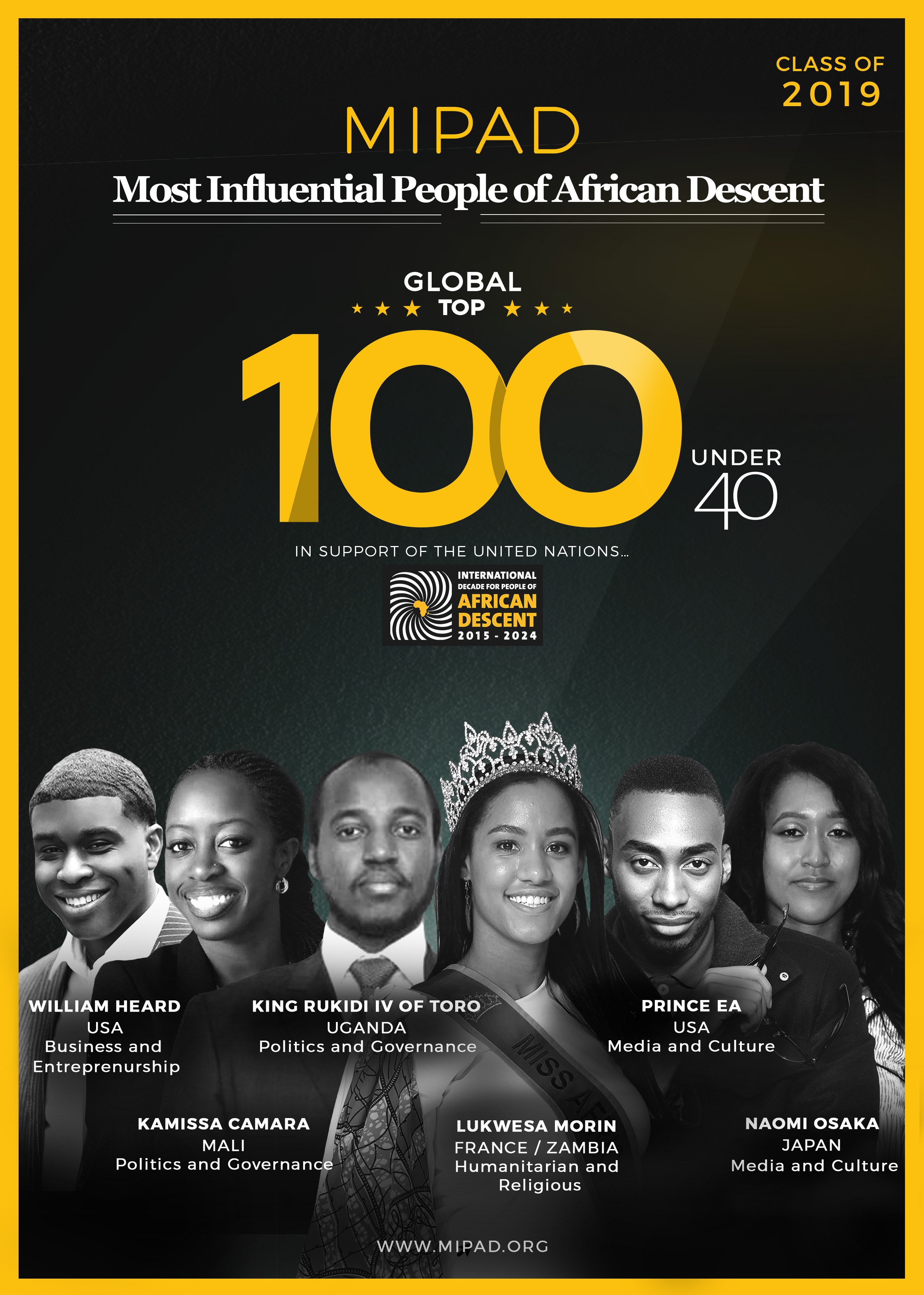 It is with great honor we begin to unveil the 2019 Most Influential People of African Descent (MIPAD) global 100 list to recognize the positive contributions made by people of African descent, worldwide, across four categories, starting with the release of POLITICS & GOVERNANCE category.

MIPAD is a unique global list that identifies, in total, 100 outstanding individuals under 40, pairing those based outside Africa in the Diaspora with their counterparts inside Africa across four categories: Politics & Governance, Business & Entrepreneurship, Media & Culture, and Humanitarian & Religious.

Our mission with MIPAD is to build a progressive global network of civil society actors to join together and support the implementation of the International Decade for People of African Descent, 2015 - 2024, as proclaimed by the United Nations General Assembly Resolution 68/237 and now officially recognized by the African Union (AU).

Please join us in congratulating the 2019 MIPAD honorees for their contributions to societies around the world, for their resilience and strength in the face of adversity, BRAVO!

The list will be unveiled in the following categories

The Recognition Week (Diaspora) in honor of the 'MIPAD Class of 2019' is slated for September 2019 in New York City, following the opening of the 74th UN General Assembly, click HERE to see provisional schedule.

Sahara Foundation’s Private Sector Engagement Specialist, Babatomiwa Adesida has been selected as one of the 2019 Most Influential People of African Descent (MIPAD) in recognition of his contribution to humanitarian work and promotion of the Sustainability Development Goals (SDGs).

Sahara Foundation is the social responsibility vehicle of Sahara Group, a leading energy and infrastructure conglomerate with operations in over 38 countries across Africa, Asia, Europe and the Middle East.

“I am very flattered by this award and humbled by the opportunity Sahara Foundation has given me to serve humanity. I am extremely passionate about Social Reconstruction, particularly in developing nations and nothing gives me more joy than the success Sahara Foundation has achieved in terms of transforming the lives of over 2,000,000 beneficiaries across our locations. I dedicate this recognition to Sahara Foundation as well as all our partners and stakeholders across the globe,” Adesida stated.

MIPAD publishes a unique global 100 list that identifies outstanding individuals of African descent worldwide, pairing those based in the Diaspora with their counterparts inside Africa across four categories: Politics & Governance, Business & Entrepreneurship, Media & Culture, and Humanitarian & Religious CONTINUES