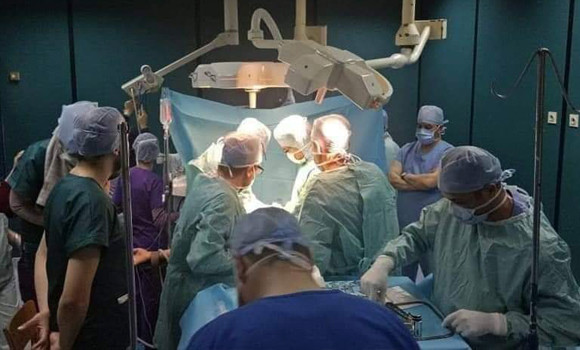 When we think of human trafficking we usually envision kidnapping and abduction of humans for slavery, sex and even terrorism, rarely do we think of human organ trafficking. What is human organ trafficking you ask, “The term organ trafficking is commonly used to refer to a range of criminal activities, including illegal organ harvesting from a living or dead individual and the illegal sale and transplantation of human organs. While some experts include forms of enslavement or coercion to obtain an organ donation in the definition, U.S. government sources typically describe such crimes as trafficking in persons for the purpose of organ removal.” International organ Trafficking: In Brief Congressional Research Service  https://sgp.fas.org/crs/row/R46996.pdf page 2.

Human organ trafficking is a huge international big business. “There is no reliable data on organ trafficking, but the World Health Organization (2004) believed it to be steadily on the increase, with brokers charging wealthy recipients $100,000+ and giving impoverished donors as little as $1,000, both amounts in U.S. dollars. It is also estimated that 10% of the organ transplants done globally are completed using black market organs (Negri, 2016; United Nations, 2018). Cultural and religious customs ban or discourage some individuals from donating organs willingly or receiving post-mortem organ donations (World Health Organization, 2004). Illegal organ harvesting generally is not harvesting organs from willing donors going against cultural laws for the sake of philanthropy, but harvesting from unwilling or uninformed donors through exploitation of impoverished, indebted, homeless, uneducated, and refugee people (United Nations, 2018). It is difficult to know exactly how many people have been victims or recipients of illegally harvested organs because of the complex nature of organ trafficking, like human trafficking in general, which leads to unreliable statistics and underreporting (Yousaf & Purkayastha, 2016).” https://ohiostate.pressbooks.pub/humantrafficking/chapter/chapter-9-organ-trafficking/

There are no exact figures for the number of people involved in or the income generated by human organ trafficking. “The desperate need for organ transplantation surgeries has given rise to a lucrative, transnational criminal enterprise that enables organ seekers to purchase organs from donors. This enterprise, commonly referred to as organ trafficking, is a global phenomenon. Even though it is illegal in most countries, some estimates indicate that trafficked organs account for up to 10% of organ transplants performed around the world, with profits conservatively estimated to be between US$840 million to US$1.7 billion annually. Illegally trafficked organs are very expensive. According to some reports, the cost of a kidney, the most commonly trafficked organ, can range from US$50,000 to US$120,000. Thus, purchasers are normally wealthy persons from developed nations such as Canada. Because the purchase is generally conducted through a vast network that includes a broker who acts as an intermediary between the organ buyer and seller, a local recruiter, as well as medical professionals and local hospitals performing the illicit organ removal, very little money is left for the “donor.” Victims are commonly from poor and vulnerable populations in developing countries. Many are reported to have been misled, coerced or otherwise forced into selling their organs.” Trafficking in Human Organs An Overview Library of Parliament https://lop.parl.ca/sites/PublicWebsite/default/en_CA/ResearchPublications/202083E

The horror stories of people being kidnapped and their organs removed are growing as are tales of funeral homes selling organs and parts without the knowledge or consent of the deceased family. “The selling of human body parts by ‘body brokers’, also known as ‘non-transplant tissue banks,’ is an incredibly lucrative business. A full human cadaver can sell for as little as one thousand dollars, up to as much as two hundred thousand dollars. Startlingly, many funeral homes actively participate in selling human remains to body brokers in order to make a larger profit than they would otherwise be able to through their ethical business practices. The business of selling human remains to body brokers affects low-income families the most. Often times, owners or employees of funeral homes will offer grieving poor families the option to have a small portion of their loved one cremated for free. However, the rest of the body will be sold to body brokers, who in turn, sell the parts to workers in the pharmaceutical and medical industry…Many of these organs, tissues, ligaments, and various body parts sold on the black market are used for illegal transplants. However, because these remains are improperly obtained and screened, those receiving the organs and tissues are at an extremely high risk of suffering from various diseases, and medical complications. But for rich individuals and their families who are desperate for a potentially life-saving transplant, they are more than happy to take the risk. And perhaps most disturbingly of all, there is no shortage of crooked doctors who are more than happy to provide them with these illegal surgeries and procedures, for a high fee.” Selling Body Parts Form The Dead Is Becoming a Big Business https://ditacademy.org/selling-body-parts-from-the-dead-is-becoming-a-big-business/

These macabre practices are widespread and unpleasant to think about, nevertheless we need to be aware of them because most of the targets and victims are poor people who can be easily taken advantage of and manipulated.