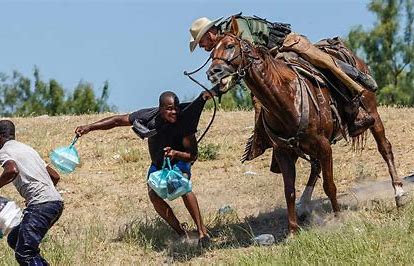 [By Junious Ricardo Stanton] Recent images of US Border Patrol Agents interacting with Haitian immigrants caused shock and stir when juxtaposed against images of Afghani refugees being shuttled onto waiting US military transport planes to he brought to the US and housed courtesy of the US government and taxpayers. The rationale is that these people need to be recued because they collaborated with the US during the US/NATO occupation of that nation in what had become the United States longest running war. President Biden took heat for his handling of the Afghanistan withdrawal and the fact he left an unknown number of Americans in the country.

People see how the US is bending over backwards to accommodate the Afghan refugees and the stark contrast to the way Black Haitians are being treated as they also try to forge a better life for themselves and their families by coming to America.

On Friday the US Secretary of Homeland Security Alejandro Mayorkas appeared at a press conference to provide an update on the situation in Texas. He stated the images of the border patrol appearing to beat the Haitians with horse reins was “not who we are and are not our values.” He stated all the migrants had been removed from the Del Rio area some were processed and returned to Haiti while others were being taken care of until their future fates could be determined.

People around the world were outraged at the images of the US Border Patrol agents’ interactions with the Haitians.  On social media there were comparisons to how enslaved Africans were treated in the US during slavery and the actions of the US Border Patrol agents. Neither is a good look especially when you consider the abysmal relationship between the US and Haiti going back to the establishment of that Republic in 1804.

Haiti’s defeat of France sent shockwaves throughout the Western Hemisphere especially the US slavocracy which was heavily dependent upon slave labor to generate the workforce and profits that would make the US the envy of the world. The resilience of the Haitian people to stave off subsequent attempts by France, other European countries as well as the United States to recolonize and re-enslave it has led to formal ostracism, crippling debt and odious “reparations” payments being imposed upon the island nation by the West. It’s as though the Western imperialists will never forgive Haiti for defeating them and casting off their shackles and chains.

On July 7, 2021 Jovenel Moise the unpopular President of Haiti was assassinated in a brazen attack on his home. There are alleged links between the assassins and the U.S., “Several of the men involved in the assassination of Haiti's President previously worked as US law enforcement informants, according to people briefed on the matter, as US investigators grapple with an increasing number of Florida links to the alleged hit squad. Haitian President Jovenel Moise was killed last Wednesday in an operation that Haitian authorities say involved at least 28 people, many of them Colombian mercenaries hired through a Florida-based security company. At least one of the men arrested in connection to the assassination by Haitian authorities previously worked as an informant for the US Drug Enforcement Administration, the DEA said in a statement in response to CNN.” Several tied to Haitian assassination plot were previously US law enforcement informants – Evan Perez https://edition.cnn.com/2021/07/12/americas/haiti-assassination-plot-us-law-informants/index.html

The US has been directly or indirectly involved in all the intrigue and mischief on the island for over a century. “Between 1911 and 1915, seven presidents were assassinated or overthrown in Haiti, increasing U.S. policymakers’ fear of foreign intervention. In 1914, the Wilson administration sent U.S. Marines into Haiti. They removed $500,000 from the Haitian National Bank in December of 1914 for safe-keeping in New York, thus giving the United States control of the bank. In 1915, Haitian President Jean Vilbrun Guillaume Sam was assassinated and the situation in Haiti quickly became unstable. In response, President Wilson sent the U.S. Marines to Haiti to prevent anarchy. In actuality, the act protected U.S. assets in the area and prevented a possible German invasion. The invasion ended with the Haitian-American Treaty of 1915. The articles of this agreement created the Haitian Gendarmerie, essentially a military force made up of U.S. citizens and Haitians and controlled by the U.S. Marines. The United States gained complete control over Haitian finances, and the right to intervene in Haiti whenever the U.S. Government deemed necessary.”  US invasion and occupation of Haiti 1915-1934 https://history.state.gov/milestones/1914-1920/haiti

In addition to invasion and occupation the US maintained indirect control over Haiti by propping numerous dictators. The US government, multinational corporations and oligarchs have been involved in all the intrigue on the island either directly or indirectly for decades. “Through framing Haiti as a nation that lies outside modernity and progress, its only hope is through developmental aid from former colonizers, international lending agencies, the United Nations (UN), and non-governmental organizations (NGOs).Â  These global “civil servants” provide development strategies that are amenable to their own economic self-interest. Neoliberal economic policies, odious debts, despotic regimes, and the overthrow of democratic governments are the result of this neocolonial order. Through racial narratives that project Haitians as existing outside modernity, and through neocolonial influences in all phases of Haitian life, Haitians are subject to global institutions that remove their agency and replace it with dependency”. From De to Post to Neo-colonization: A brief history of Haiti’s occupations Jason D. MacCleod https://www.jasondmacleod.com/de-to-post-to-neo-colonization-history-haiti%E2%80%99s-occupations/

There is more to the Haiti situation than meets the eye.