FBI Raid on the African People’s Socialist Party:
A Chilling “Message,” an Act of State Repression

On July 29, the FBI raided the St. Louis, Missouri home of Omali Yeshitela, the leader of the African People’s Socialist Party (APSP) and the Uhuru Movement. The APSP and the Uhuru Movement are Black nationalist organizations with a history going back to the early 1970s of opposing U.S. imperialism and the oppression of Black people.

Local news coverage said the raid took place at 5 am, and the FBI used flashbang grenades to startle the occupants of the home. Yeshitela and his wife were detained in handcuffs during the search. According to Yeshitela, scores of agents and local police in combat gear with automatic weapons broke down his door, broke windows, and sent a drone into his house nearly hitting his wife.

At the same time, the FBI staged raids on different offices of the Uhuru Movement in St. Louis and St. Petersburg, Florida, including the office of the APSP’s radio station and newspaper, Burning Spear. 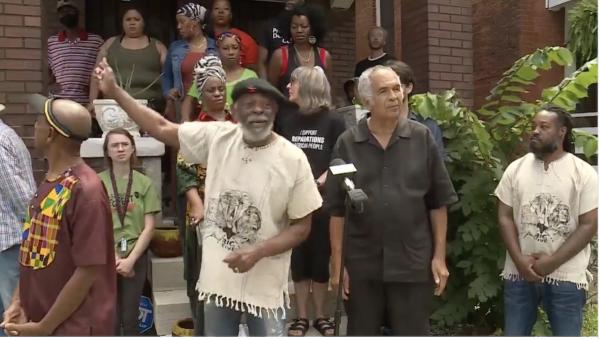 Omali Yeshitela, leader of the African People's Socialist Party, points to damage done in the FBI raid on his home.

The FBI claims these raids were to gather evidence in a criminal case against a Russian national, Aleksandr Viktorovich Ionov, who is in Russia. The indictment of Ionov does not name APSP or Uhuru but refers to “Unindicted Co-Conspirators” (UICs) whose location, description, and activities, as laid out in the indictment and in a Department of “Justice” press release correspond to the APSP and Uhuru (for example, identifying dates and locations where the APSP ran or supported candidates for local public office in 2017 and 2019 while not explicitly naming the organization). Among other charges, the indictment claims Ionov funded candidates in U.S. elections, and the descriptions match candidates the APSP and Uhuru ran for mayor and city council in St. Petersburg.1

Including UICs in indictments is a legal device that the FBI has used to justify “investigating” (harassing, intimidating, spying on, and isolating) people not charged with crimes.2 In this case, the “Justice” Department indictment of Ionov has all the hallmarks of being a thin “legal” cover for going after APSP and Uhuru for their political views, and specifically at this time their justification and political support for the Russian invasion of Ukraine.3

There is a proxy war being fought out in Ukraine between the rival imperialist powers of Russia and the Western imperialist U.S./NATO bloc. Russia invaded Ukraine, and the U.S./NATO is arming the Ukrainian military and resistance against this invasion. Neither imperialist power, nor its acts and rhetoric, should be supported, from the standpoint of humanity. At the same time, the raids on APSP and Uhuru must be opposed by everyone who finds it unacceptable for the FBI and the U.S. government to move to silence views that are different from U.S. propaganda pumped out by its organs of mainstream media, especially those critical of the U.S. role in the world.

A “Legal” Pretext, an Intimidating “Message” to Enforce Loyalty in Time of War

In St. Louis, St. Petersburg, and nationally, TV news regurgitated and amplified FBI claims that the raids were a “crackdown” on “Russian propaganda.” This at a time when people in this country are being inundated with propaganda programming them to cheer on their “own” U.S. ruling class (really their own oppressors), pumping out U.S. chauvinism, and hate against anyone associated with Russia. A week after the raids and sensationalized coverage, a man with a flamethrower torched a red, black, and green Black nationalist flag flying outside the raided home. Police say he told them he didn't like "socialists" or the "ugly flag" he saw every day going to and from work.

The so-called “evidence” in the indictment linking UICs—reportedly referring to APSP and Uhuru—to an operation of the Russian government includes statements circulated by APSP and Uhuru that “the war [in Ukraine] began 8 years ago, when the US and the EU brought new leadership to power in Kiev;” and that “pro-Western neo-fascists… shot thousands of civilians in Donbas.”

Invoking such statements as “evidence” in a criminal case is a very dangerous attack on not just opposition to the U.S. role in the war in Ukraine, but to basic evidence-based critical thinking and dissent in general.

Following the logic of the logic in this indictment, and the high-profile and massive militarized raids on APSP and Uhuru, a “message” is being potentially sent to all those who raise questions about, expose or criticize the “official story” presented by the rulers of the U.S. to justify and romanticize their brutal, bloody proxy war with Russia in Ukraine.

It is important to note that every criminal war for empire waged by this country, including the proxy war in Ukraine, has been accompanied by violent suppression of dissent, shredding of civil liberties, and inciting blind rage against sections of people who the U.S. rulers worry might be disloyal.4 All to enforce a toxic cloud of ignorance about the actual nature of what this country does to people here and around the world through its wars for empire. And all efforts to suppress differences and dissent, protest and debate over what the U.S. does around the world, including the proxy war in Ukraine, must be condemned and opposed.