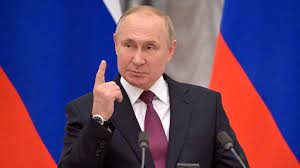 “The network behind this coup had actually started planning for the coup back in 2011. That’s when Eric Schmidt of Google, and Jared Cohen, also now of Google but still continuing though unofficially as U.S. Secretary of State Hillary Clinton’s chief person tasked to plan ‘popular movements’ to overthrow both Yanukovych in Ukraine, and Assad in Syria.” How and Why The US Government Perpetrated the 2014 Coup In Ukraine by Eric Zuesse https://moderndiplomacy.eu/2018/06/04/how-and-why-the-u-s-government-perpetrated-the-2014-coup-in-ukraine/

The truth is the United States under President Barack Obama instituted a coup d’état in 2014 in Ukraine to set up a pro-Western quisling government. To see beyond the Western propaganda okey-doke and flim-flam please read the articles on these Websites:  https://moderndiplomacy.eu/2018/06/04/how-and-why-the-u-s-government-perpetrated-the-2014-coup-in-ukraine/, https://mronline.org/2022/02/24/what-you-should-really-know-about-ukraine/, https://www.politifact.com/factchecks/2014/mar/19/facebook-posts/united-states-spent-5-billion-ukraine-anti-governm/. These articles offer another perspective on what is really going on in Ukraine and name some of the key people and forces behind the happenings. For another eye opening reality check watch the YouTube audio of a conversation between Assistant US Secretary of State Victoria Nuland and US Ambassador to Ukraine Geoffrey Pyatt talking about their plans for the coup and beyond https://www.youtube.com/watch?v=WV9J6sxCs5k

The US government and their media sycophants lie and demonize leaders to create antipathy towards them to justify the wars, “police actions” and interventions  the US ruling class and its allies launch against them to toppled their governments, steal their natural resources or for geostrategic reasons. The US government and the ruling elites’ mind control apparatus are making Vladimir Putin out to the bad guy in the Ukraine situation just as it made Osama bin-Laden a villain (they said he orchestrated 9-11 from a cave in Afghanistan, still no solid proof of that), Saddam Hussein (they said he planned 9-11 and had WMDs, both lies), Muammar al-Qaddafi (NATO bombed his country, savagely murdered him and turned Libya into a failed state) and Bashar al-Assad (the US lied and said he gassed his own people). Do you see a pattern here?  Now the US media is saying Vladimir Putin is an unhinged, deranged megalomaniac but say nothing about an obviously cognitively declining Joe Biden!

The US political class and media have been demonizing Putin for years. Hillary Clinton and the Deep State claimed Putin interfered with the 2016 presidential election. A special prosecutor is still investigating that and several Clinton operatives were behind “Russiagate”. There are rumors indictments will be forthcoming; I’ll believe that when it happens. (The ruling class rarely gets indicted or goes to jail.) In contrast nothing was said about Mark Zuckerberg’ Facebook and Cambridge Analytica’s actual attempts to influence the election outcome. https://www.npr.org/2018/03/20/595338116/what-did-cambridge-analytica-do-during-the-2016-election What’s up with that?

We don’t question what the “experts” and government officials say because their pro-war barrage is constant; it unrelentingly repeats the same message over and over again. If you do ask questions, dissent or offer another perspective you are denounced as a traitor, a tin foil hat wearer, “conspiracy theorist” or crazy. They ignore you, marginalize you or unleash the full force of their brainwashing attack machine against you.

But even before the next Hitler de jure is manufactured and paraded before the public 24/7/365, we are prepped, brainwashed and programmed for war. The US loves war. The US has been on a constant war footing since before there was a United States of America.. This country has been at war 93% of its total existence. There have only been only twenty-three years when this country has not been at war during its entire existence!

If you want to know how they do it I suggest you read Mathias Chang’s book Brainwashed for War, Programmed to Kill: The Military Media Industrial Complex Behind The Cold War, the Vietnam War & The War on Terrorism

What we are being told by the corporate media and their digital platform cohorts is not the truth about Ukraine or much of anything else for that matter. Ukraine is not the victimized fledgling democracy being brutalized by big bad Vladimir Putin. Ukraine has been in the crosshairs of US imperialism for quite some time now. The US facilitated a coup in 2014 that helped Neo-Nazis gain a foothold in the government. https://marktaliano.net/eight-years-ago-us-nato-installed-a-neo-nazi-government-in-ukraine-by-prof-michel-chossudovsky/

Last but not least Joe Biden and his son Hunter are neck deep in Ukraine side hustles. But for the most part the corporate media ignored these facts. You can see an official investigation final report here: https://www.hsgac.senate.gov/imo/media/doc/HSGAC_Finance_Report_FINAL.pdf

There is more to this Ukraine situation than meets the eye, don’t fall for the flim-flam!

Don’t Fall For the Flim Flam