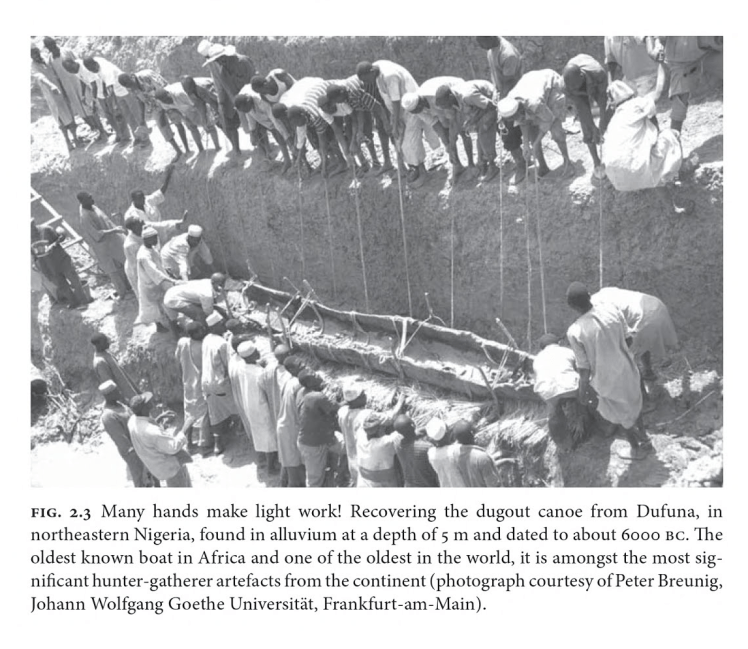 Celebrate Black History All the Time

We’re in Black History Month and we still don’t get it, African people have the oldest, longest and most creative history of any people or ethnic group in the planet; but we don’t do the research or study the research others have done to show just how ingenious our ancestors were/have been.

Last year I came across a story on a Website that showed an eight thousand year old dug out canoe in Nigeria. This was significant on so many levels. First of all when we think of Africa, the second largest continent on this planet, we don’t think of Africans as being seafarers, mariners or navigators. But we should.

What we don’t realize is Africa is a large continent that abounds with major rivers tributaries and lakes. Thousands of years ago our ancestor learned to build the means to navigate these waterways. We tend to only think of the Nile River but Africa has several major rivers, lakes and bodies of water.

The Nile River is the world’s longest river and is one of two that flow south to north (the Amazon River in South America is the second). The Congo River is also a long river, but there are others such as the Niger, Senegal, Volta, Zambezi, Orange and Limpopo scattered throughout the continent. Then here are the large lakes: Victoria (named by the invading English), Albert, Nyasa and Tanganyika. So it should come as no surprise the ancient people of Africa learned to build canoes, sail boats or that they were expert fishermen, swimmers and explorers.

We know ancient Africans populated the world but we never consider the fact they did so by sea as well as land, mainly because we still believe the lies about Africans spread by our adversaries and enslavers.

Most maps of African out-migrations show land routes but I’m convinced they also used rafts and boats to travel from Africa to Asia and beyond. Now others postulate this theory also. “Human ancestors that left Africa hundreds of thousands of years ago to see the rest of the world were no landlubbers. Stone hand axes unearthed on the Mediterranean island of Crete indicate that an ancient Homo species — perhaps Homo erectus — had used rafts or other seagoing vessels to cross from northern Africa to Europe via at least some of the larger islands in between, says archaeologist Thomas Strasser of Providence College in Rhode Island. Several hundred double-edged cutting implements discovered at nine sites in southwestern Crete date to at least 130,000 years ago and probably much earlier, Strasser reported January 7 at the annual meeting of the American Institute of Archaeology. Many of these finds closely resemble hand axes fashioned in Africa about 800,000 years ago by H. erectus, he says. It was around that time that H. erectus spread from Africa to parts of Asia and Europe.” Hominoids Went Out of Africa On Rafts. https://www.wired.com/2010/01/ancient-seafarers/

Our African ancestors first learned to navigate water by mastering the streams, rivers and lakes in Africa. The discovery of the eight thousand year old canoe in Nigeria makes the case for African technology, ingenuity and use of water to secure food and travel from place to place.

This canoe is the third oldest in the world.  “Since the Dufuna canoe was discovered by a local Fulani herdsman in 1987 archaeologists have been in frenzy about the discovery. The canoe which was excavated by a combined team of Nigerian and German archeologists in 1994 at Dufuna, has continued to amaze them, for the simple reason that it has changed the course of history. Dufuna is a village along the Komodugu Gana river in Fune local government area of Yobe State. The boat was dug out from a depth of five meters beneath the earth's surface and measured 8.4 meters in length, 0.5 meters wide and about 5 cm thick varying at certain parts of the surface. The age of the boat has been put at about 8000 years old (6000 BC), thus, becoming the oldest boat in Africa and third oldest on earth. The canoe belongs to the Late Stone Age period (Neolithic Age), when humans ceased to roam the face of the earth hunting to become herdsmen and cultivators and in the process becoming modifiers of their environment, with complex social structures, in response to new problems and ways of dealing with situations. ‘The discovery of this boat is an important landmark in the history of Nigeria in particular and Africa in general’ said the late Dr. Omotoso Eluyemi then the Director of the National Commission for Museums and Monuments.

‘Besides proving that the Nigerian society was at par (if not earlier) than that of Egypt, Mesopotamia, and Phoenicia, the discovery also provides early concrete evidence that Africans have been exploring technology to modify their environment and suit their needs. But more importantly, the canoe has shown that people in the Niger area had a history of advanced technology and that they had mastered the three major items of neolithic culture which included the fashioning, standardization and utilization of tools according to set traditions. It gives concrete evidence of transportation by seas as well as providing evidence of some form of long distance commercial activities indicative of existing political and economic structures.’” https://www.nigeriagalleria.com/Nigeria/States_Nigeria/Yobe/Dufuna-Canoe-Yobe.html

We tend to focus only on the Nile Valley contributions to human development, but the Nile Valley was merely one center of advanced development. Our ancestors were innovative and ingenious all over the continent of Africa. We need to learn more about their genius and innovation, Black History Month is merely the starting point.