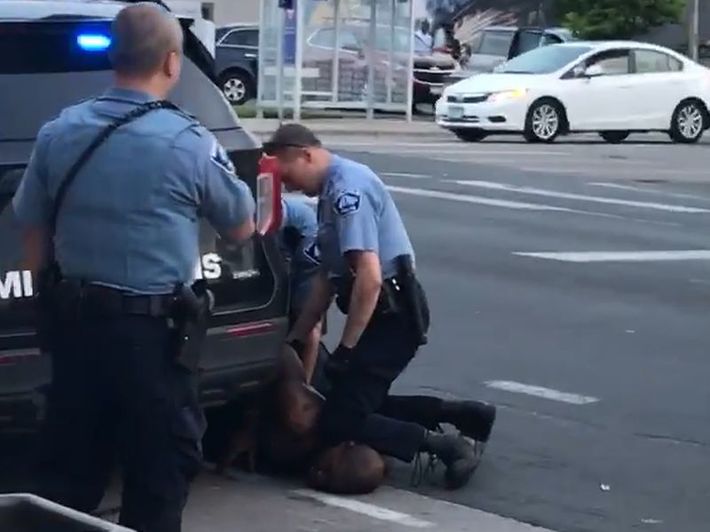 “On May 26, hundreds of protesters were attacked by police in the city of Minneapolis during a protest against the murder of George Floyd, an African-American man, by a police officer on Monday May 25. Protesters gathered at the intersection where Lloyd was murdered on Tuesday May 26 after the news of his death spread over social media. A memorial for Floyd was organized and people chanted against the police and held up signs condemning institutionalized racism in the US. Protests were also held outside the Minneapolis Police Department’s 3rd precinct office building, the circle to which the accused police officers belonged to. Eye witness accounts over social media alleged that police were found using tear gas, drones and riot gear to disperse the crowd, leading to a violent clash at the scene.” https://peoplesdispatch.org/2020/05/27/widespread-outrage-across-the-us-over-the-murder-of-george-lloyd-by-police/

Lloyd’s death received more media coverage than the March 2020 death of Breonna Taylor an EMT by Louisville Police who busted into her home firing wildly while attempting to execute a search warrant at what turned out to be the wrong house. Her murder followed the killing of Ahmaud Arbery who was innocently jogging in Glynn County Georgia by three white men in February. These deaths were senseless and uncalled for as are all the deaths by the hands of our own people due to the hatred and negation we have internalized from this society. We have to be more resolute when we affirm Black Lives Matter if we want to make it real!

George Lloyd’s death occurred during a time folks were extremely frustrated and anxious due to the round the clock gloom, doom and death propaganda about the SARS-CoV-2 by the corporate and monopoly social media (Facebook, Google, Twitter etc), also from being locked down as the US economy came to a grinding halt and because of the uncertainty of their futures.The policy of economic shutdown, social isolation, wearing masks, social distancing, not being able to visit relatives in the hospital or acute care facilities has heightened the stress levels of many Americans and concomitantly undermined the psychological and physical wellbeing of many people.

The controlled narrative promoted by the media and the political overreach of many elected officials have contributed to unheralded fear, stress and pressure. While people may not be able to fully articulate their frustrations and fears part of their frustration is because there are no historical, scientific or medical precedents to social and economic lockdowns. Deep down inside they know something is not right. We intuitively know humans need and crave contact, interaction and intimacy so the lockdown runs counter to our basic psychological and social needs.

The frustrations and the anxiety about their future and more importantly the fear generated by the media hype of SAS-CoV-2 have increased the stress levels and the demonstrations and riots we are seeing now are not necessarily centered on the death of George Lloyd. Life as we knew it has changed people didn’t have the usual diversions to take their mind off of their troubles, in person no sports, concerts or large gatherings When an organism, machine or person is under immense stress, it needs a release or it will explode. Despite the control of the COVID 19 narrative there are psychologists warning of unhealthy outcomes from the lockdowns. “Over long periods of time, social isolation can increase the risk of a variety of health problems, including heart disease, depression, dementia, and even death. A 2015 meta-analysis of the scientific literature by Julianne Holt-Lunstad, a research psychologist at Brigham Young University, and colleagues determined that chronic social isolation increases the risk of mortality by 29%.  That may be because social contacts can buffer the negative effects of stress. Lab studies by Holt-Lunstad and others have found that having a friend present can reduce a person’s cardiovascular response to a stressful task. There’s even a correlation between perceived social connectedness and stress responses.” Social Distancing Prevents Infections But It can Have Unintended Consequences Greg Miller https://www.sciencemag.org/news/2020/03/we-are-social-species-how-will-social-distancing-affect-us.

Technology can help but humans need closeness in their interactions. “Even so, those modes of communication don’t entirely replace face-to-face interactions, Segrin says. ‘When we interact with other people, a lot of the meaning conveyed between two people is actually not conveyed in the actual words, but in nonverbal behavior,’ he says. A lot of those subtleties of body language, facial expressions, and gestures can get lost with electronic media. ‘They’re not as good as face to face interactions, but they’re infinitely better than no interaction,’ Segrin says.” ibid

While Lloyd’s death was egregious many of the nationwide protests are due to people wanting to get out, mix and mingle especially for a worthy cause. People want to express their displeasure at the system including their unhappiness with the lockdowns and their anxiety about the economy. In many ways their protests are a way for them to let off steam. The riots may have been deliberately provoked, time will tell but emotions are running high and much of that is due to current events. These protests are providing a release.