The RNL Show - Episode 9: American Fascism On the March: The Need for Resistance and Revolution 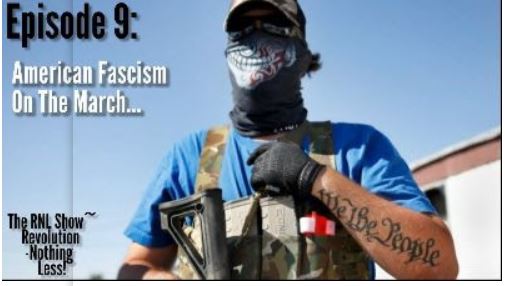 On this Episode join the RNL Show hosts Andy Zee and Sunsara Taylor as they confront the recent escalations in fascism under the cover of COVID-19. From the attacks on the rule of law to armed white supremacists in the streets.

Segments of Bob Avakian’s speech THE TRUMP/PENCE REGIME MUST GO! In The Name of Humanity We Refuse To Accept a Fascist America, A Better World IS Possible is aired, which examins the roots of this American fascism and struggling with people over their refusal to see what is unfolding before us and share segments of the RefuseFascism.org Statement of Conscience. Later, we go to his speech, Why We Need An Actual Revolution And How We Can Really Make Revolution, on the relationship between the fight for revolution to overthrow the whole system of capitalism-imperialism and uniting very broadly to drive out the fascist Trump/Pence Regime.