Crosscurrents: African and Black Diasporas in Dialogue Now Thru April 14

For a exhibition about dialogue, it was instead a moment of silence that opened the new show at San Francisco's Museum of the African Diaspora (www.moadsf.org). Crosscurrents: African and Black Diasporas in Dialogue, 1960-1980, focuses on the black liberation movement and its impact on the arts, culture and politics across the world, is on display at MoAD through April 13, 2014. 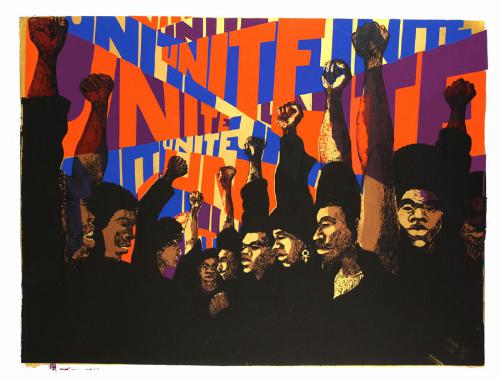 "Unity creates community among blacks globally," said Harrison. "That's what this exhibit represents. And what better way to open it than pay respect to Mandela, who taught all of us how to work to forgive, communicate and grow our solidarity for continuing the cause to attain equality for all people, regardless of color."

Black solidarity and the fight for equal rights internationally is the focus of this show, which contains more than 100 items. These pieces range from paintings, photos and sculptures, to posters, buttons and newspapers. Artists from as close to home as San Francisco, to throughout the United States, Africa and the Caribbean created the works in this exhibit.

"Crosscurrents is a collection of fine art, documentary and artistic photographs, and material ephemera exploring the influence of Black liberation movements on music, art, poetry, and drama. In addition, the exhibition will be accompanied by a catalogue featuring thirteen scholarly essays," said Lizzetta LeFalle-Collins, curator of Crosscurrents.

The exhibit also includes a special film series to deepen visitors' appreciation of the collection. Several of the films were created during the 1960s to 1980s, and some are recent productions that take a reflective look back at the time. The films run Thursdays at 6:30pm starting January 16 through April 10, 2014.

"The film series, Cross-Cutting: Black Insurgency on Film, complements the Crosscurrents exhibit with a particular international focus. I'm thrilled there will be a mixture of documentaries shedding new light on legendary figures like Angela Y. Davis, Frantz Fanon and Robert F. Williams as well as rare screenings of works like UPTIGHT and RIGHT ON!: POETRY ON FILM (THE ORIGINAL LAST POETS) which were lost for decades," explained Cornelius Moore, Curator of the Crosscutting Series and Co-Director of California Newsreel.

To view the exhibit and films, MoAD is located at 685 Mission Street in San Francisco. The museum is open Wednesday through Saturday, 11am to 6pm, and Sunday Noon to 5pm. It is closed Monday and Tuesday. Admission is $5 to $10. Films are free with paid admission. Call 415.358.7200 or visit us atwww.moadsf.org.

About the Museum of the African Diaspora
The Museum of the African Diaspora (MoAD) showcases the history, art and the cultural richness that resulted from the dispersal of Africans throughout the world, with innovative and engaging exhibitions, education and public programs. MoAD opened in 2005 as a cornerstone to the revitalization of downtownSan Francisco on the ground floor of the St. Regis Hotel and Residences at 685 Mission Street. As a nonprofit organization, the museum's operations and programs are supported by grants and contributions from public and private sources. Visit www.moadsf.org.