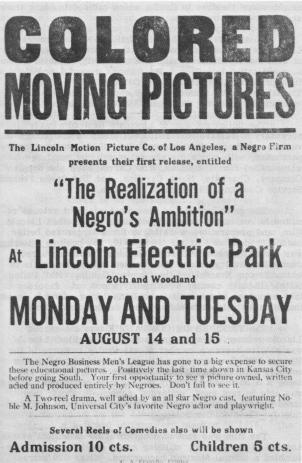 “The first black independent filmmakers began making films for (de jure) segregated theatres in the south and (de facto) segregated theatres in the north. There were over 1,000 theatres in America that screened black-audience films either exclusively or on a preferential basis. According to archivist G. William Jones (who in the 1980s supervised a major restoration project of early black film), 1921 was a peak year for distribution within this integrated production/distribution/exhibition system. This system lasted until the mid-1950s.” A Short History of Black US Indie Cinema, Ashley Clark  https://www2.bfi.org.uk/news-opinion/news-bfi/features/short-history-black-us-indie-cinema

In 2021 we take for granted the omnipresence of mass media, countless over the air broadcasts, satellite programming, theatric films and streaming often with Black producers, directors, actors and support crews; but it wasn’t always like this. Blacks were able to get into the recording industry as artists and later owners early on in that medium’s history. There was no Black owned radio stations when that medium was launched in the 1920’s, it took decades (1949) before Blacks owned a radio station. But there was a movement of Black film makers in the 1900’s that most of us are totally unaware of or if we are; it is usually relegated to one person, Oscar Micheaux.

The history of independent Black film making is a storied one; one we should know about because it was a way for Black people to tell their stories and show us in a flattering light during a time of virulent racist stereotyping, violence and oppression. In this oppressive milieu it took courage, vision and determination for an African-American to launch a film making enterprise and career. Nevertheless there were numerous brave souls who accomplished this.

Like the recording industry that categorized Black artists creating, playing singing and recording our own music as “Race Records” or “Race Music” independent films produced and directed by African-Americans were called “Race Films”.  These daring entrepreneurs created a new genre of film outside of the white Hollywood studio system. “And they were produced by independent production companies and focused on the everyday life of what it meant to be Black in America. While the system was a product and mirror of segregation, it also fostered an entire generation of independent African American filmmakers and helped establish a ‘Black cinema’ in America, an art form and system where Black directors were empowered to be independent – raising money, shooting and editing, and scoring films themselves. These movies gave African American audiences and actors a forum to articulate their own identity outside of the studio system which rarely bothered with the full spectrum of that identity.” Race Films: The Black Film Industry That Told Black Stories in Cinema’s Earliest Days, Paul D. Miller https://editorial.rottentomatoes.com/article/race-movies/

Many Black people are familiar with Oscar Micheaux (1884-1951) but there were several pioneering independent Black film makers and motion picture companies telling their stories, putting Black people on the moving picture screens around the country. In addition to Micheaux there was Mark Noble and his brother George who founded the Black owned production company Lincoln Motion Picture Company who also acted in films under the name Noble Johnson. Spencer Williams 1893-1969 (who also played Andy in the CBS Amos and Andy TV series) directed 13 films. Tressie Saunders (1897-1995) was credited as being the first woman to direct a feature film entitled A Woman’s Error but little is known of her.

On the business side there were Black owned motion picture companies. These independent companies wanted to tell ourstory which was different from the racist narrative of the white companies. “Finally, black Americans could see themselves as lawyers, cowboys, even royalty, and they weren’t gambling, drinking, stealing chickens, shooting craps or any of the other stereotypes that white Hollywood had chosen for them. If these kinds of stock characters appeared in race movies, they were most often relegated to villainous roles. Meanwhile in mainstream Hollywood, Hattie McDaniel, was awarded an Oscar in 1940 for her performance as ‘Mammy’, the demeaning dim-witted servant in Gone with the Wind. During the height of their popularity, race films were shown in as many as 1,100 theaters around the country as an antidote to racism and stereotypes in the entertainment industry” Race Movies and the Black Owned Studios That Thrived Next to Hollywood https://www.messynessychic.com/2020/02/06/race-movies-and-the-black-owned-studios-that-ran-parallel-to-mainstream-hollywood/

One of the first film entrepreneurs was William Foster who started the Foster Photoplay Company in Chicago in 1910. In 1917 Peter P Jones founded the Peter P Jones Photoplay Company. These companies were short lived for numerous reasons: lack of capital, new technology (talking films) and ironically integration. Most of the films these directors and companies created no longer exist but those that remain demonstrate an innovation, creativity and vision that laid the foundation for conscious Black artists/entrepreneurs to build upon. To see some of these films go to https://www.criterionchannel.com/pioneers-of-african-american-cinema.