~ Please forward this message! ~
A LETTER FROM LYNNE
Scroll down for HOW YOU CAN HELP free Lynne!

Well, we are once again being educated in the meaning of “protracted
struggle”, not that anyone wanted or needed this.  It was clear
yesterday in Court in NYC that Judge Koeltl was not going to act solely
within the “spirit ” of the law but would instead rely upon the Bureau
of Prisons to make a “legal” motion on my behalf.  Although the lawyers
valiently argued that justice does not allow for a “right” without a
“remedy”, in my case, the right to die at home and the fact that there
is no appeal (remedy)  from the Bureau’s decision.

There are new and compelling facts now before the BOP–the prognosis
now of 18 months and the fact that the PET scan revealed that the most
serious cancer (of the lungs) is getting worse.  The Judge yesterday,
asked the Government to concede (as their papers did by not contesting
any facts) that I qualified in every respect for the release.  They, of
course, remained silent.   For that reason I am asking once again that
all of you send a “shout” out to the BOP [Federal Bureau of Prisons], AG Holder and Pres. Obama and
express any outrage you might feel that the days and months are ticking
by and I remain in Texas.  The DC Prison Bureaucracy clearly would just
as soon see me die here.

So, not to be discouraged or disinheartened by this latest legal
impediment–the walls of Jericho DID come tumbling down, eventually !!

A "BREAK THE CHAINS" LETTER ~ You've already signed the
petition - now please write a personal note and forward this email to 2
of your closest friends - and ask them to sign & send this to 2 of
their closest friends, and so on! 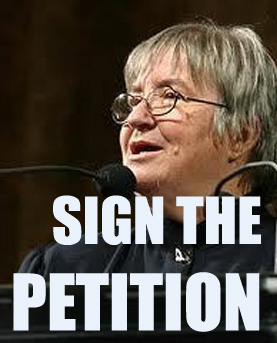 ATTENTION MEDIA
AND ALL YOU CREATIVE TYPES OUT THERE:

Can you think of a way to help Ralph help Lynne?

Here are the stats for Justice for Lynne Stewart on FB: