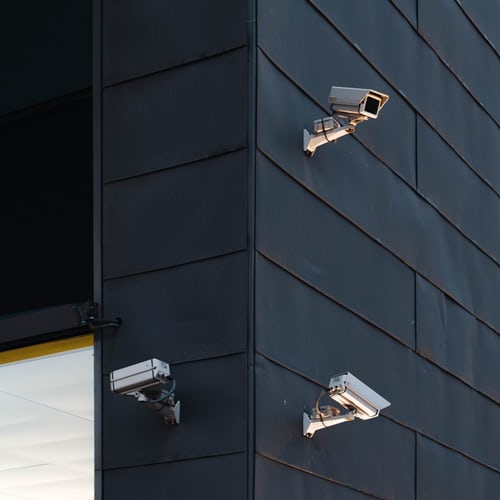 “In a study conducted by the Safety.com security team, research has found that the average American is filmed by security cameras over 230 times a week, a number that has increased rapidly over the last decade and will continue to do so in the near future. Surveillance technology isn’t new, but there has been an exponential increase in the number of security cameras deployed throughout the United States and around the world. CNBC reports that there will be an estimated one billion security cameras filming around the world by 2021, with somewhere between 10-18% of those being in the United States alone.” Study: The Average American Is Filmed By At Least An Estimated 238 Security Cameras A Week  https://www.safety.com/digital/identity/average-american-filmed-by-an-estimated-238-security-cameras-a-week/

The Orwellian notion of a Big Brother spying and monitoring us, subtlety intruding into our lives and even our thoughts is real. Make no mistake about it and it is set to get even more sinister. Of course the powers that be behind the surveillance and voyeurism tell is it is for our own good, safety and protection, it’s progress. Right!

The old retort, why do you care if you have nothing to hide is a specious argument. If the NSA and other alphabet agencies, corporations, social media and digital platforms were spying on us for our own good, health, safety and welfare it would be a novel approach. But the fact is their spying has nothing to do with us; it is about them. They are collecting and harvesting data on us 24/7/365 for their own purposes and motives that have nothing to do with our wellbeing and security!

On its most benign level we are being spied upon and data harvested so companies can market to us, influence our spending and purchases. Have you noticed how right after you shop or search Online the next time you go to that Website similar products and items are embedded on the page? Do you think this is coincidental? This is deliberate and part of a process.

At its most nefarious levels we are being watched, monitored and surveilled by the government, corporations and even potential hackers not for our safety but so they can manipulate and control us, watch us so we don’t go off the reservation.  It is much like during enslavement when the militias and slave patrols (patty rollers) kept watch to prevent runaways and potential insurrections. Today’s watchers are not doing it to stop terrorists and malefactors or mitigate against a “pandemic”, they are doing it to maintain the status quo to ensure their status as oligarchs, technocrats and rulers.

George Orwell’s Big Brother scenario is alive and well under the guise of protection and safety. Using fear of “terrorists”, shoplifters and now under the guises of security and progress, the ruling oligarchs are growing more and more emboldened and expanding their spy networks into every level of our lives. COVID contact tracing is one aspect of this.

An independent product and service reviewing site www.safety.com recently reported we are actually filmed on average at least 238 times a week! https://www.safety.com/digital/identity/average-american-filmed-by-an-estimated-238-security-cameras-a-week/. They break it down this way: about fourteen times in your home or neighborhood, one hundred and sixty times while you are driving, forty times while at work and twenty-four times while you are shopping or doing errands. “It’s important to note that while we found an average we are comfortable reporting on, the swings both directions can be drastic. There are people, as an example those who frequently travel by air, or work in high security environments, who might be on camera easily over 1,000 times a week, while there are plenty of jobs and careers that might make it so someone entirely avoids being recorded during their average week.

We expect this number to continually increase and normalize the presence of security cameras as technology and facial recognition improves.” https://www.safety.com/digital/identity/average-american-filmed-by-an-estimated-238-security-cameras-a-week/  Keep in mind Safety.com is not a political agency, they are not conspiracy theorists/researchers they are merely reporting the facts!

Soon Big Brother will be even more intrusive as they roll out massive facial recognition technology and nanotechnology nanobots are injected into our bodies. Of course this will be marketed as life saving, revolutionary, must have mandatory innovation. Check these out, https://interestingengineering.com/nanobots-will-flowing-body-2030 and https://interestingengineering.com/neuralink-chip-will-be-able-to-stream-music-into-your-brain.

We have to be ever mindful the oligarchs do not value our lives or us. Many are eugenicists, megalomaniacs and psychopaths hell-bent on world domination. They refer to us as “useless eaters” and “deplorables”. The really alarming part is these are the same people behind the emerging Fourth Industrial Revolution. https://www.bernardmarr.com/default.asp?contentID=966

We will share more about that in the future.