0
S Africa Chinese want to be blackMan in Chinatown 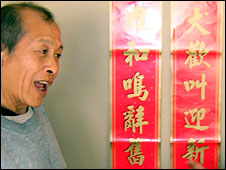 Chinese activists say they also fought against apartheidChinese communities in South Africa are taking the government to court over laws which they say discriminate against them.The Chinese Association of South Africa says it wants its members to be included in the definition of "black people" in constitutional laws.It wants people of Chinese origin to be included affirmative action programmes designed to help black people.An estimated 200,000 ethnic Chinese live in South Africa.Ethnic Chinese will soon know if they will benefit from the Broad-Based Economic Empowerment and the Employment Equity Acts.The BBC's Mpho Lakaje in Johannesburg says these laws were designed to eradicate the legacy of apartheid which left many black people impoverished.The laws give people classed as blacks, Indians and coloureds (mixed-race) employment and other economic benefits over other racial groups.The Black Economic Employment concept was initiated by the governing ANC to help previously disadvantaged individuals - to start their own businesses or become part of existing companies - thus redressing the country's historic inequalities.Whites still on topOur correspondent says a ruling should provide clarity for corporations in South Africa on the rights of their Chinese staff - who were declared "coloured" under apartheid but are generally regarded as white today.An example cited in court papers includes an oil company that disqualified Chinese citizens from getting a slice of its biggest empowerment transaction to date.The company says the group is not catered for in the Black Economic Empowerment codes.Another example includes a Chinese national who was refused an opportunity to buy shares from the Johannesburg Stock Exchange two years ago.None of the three government departments cited as respondents in the court case are expected to oppose the application.A study released last month revealed that white South Africans still earn around 450% more than their black counterparts, 14 years after the end of apartheid.